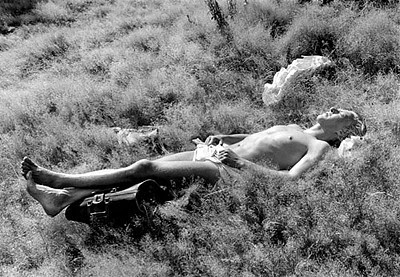 From "Passing Through Eden" by Tod Papageorge

How many of us have the guts to walk right up to entwined lovers in the park and take their picture? Tod Papageorge does in Passing Through Eden: Photographs of Central Park (at Pace/McGill through May 12). Made in the park from the late 60s through the 90s, the show is full of artful glimpses, not confrontations, but it got me thinking about unpremeditated, shoot-what-you-find technique. Spotting the subject, pre-visualization & technical fiddling beforehand, the approach, how close to go, when to raise the camera? – all of it converging in the anxious, improvisational moment of pressing the shutter. I loved the show for the gorgeous unplanned perfection this technique can sometimes discover in the uncontrollable world.

In the late 70s I prowled through my own summertime eden, the neighborhoods around the lakes of South Minneapolis, determined, like Papageorge, “…to call this intoxication to account.” I called the resulting book, Snapshots Deluxe; you can read what I wrote about it here .

Except at parades, demonstrations or other public events where people are in a sense costumed and expecting to be photographed, I rarely take these kinds of pictures anymore. I wonder if Papageorge does. Even as cellphones snap away by the millions, there seems to be a new & pervasive fear of being photograpically singled-out on the street. In the workshops I taught this year, my students were intimidated. “How do you take pictures of people you don’t know?” they asked. I suggested they ask permission. “But what if I want them NOT posing?” they asked. I told them to just shoot & see what happens. But I also gave them my opinion: “Don’t shoot children you don’t know.” In “Snapshots” I photographed a lot of kids without asking for permission. Not anymore. Pedophiles, real & imagined, have replaced the devil in our modern consciousness. Shooters beware.

All that aside, this is a GREAT show. At 20 X 24 the prints are large enough to study but modest enough to avoid the smug self-regard of so many gigantic gallery prints. They favor silvers over deep blacks in keeping with the mostly mid-day light, often on bared flesh. They’re sad & funny & full somehow of the eager attention to the world that brought them into being.

Here’s Papageorge’s own thoughts about what he was doing:

"Photographing in the street with a Leica doesn't have much to do with planning. You walk out the door and—bang!—like everyone else, you're part of the great urban cavalcade. But unlike everyone else, you're carrying an amazing little machine that, joined with a lot of effort, can pull poetry out of a walk downtown. All of the failed pictures you've ever made, all of the other photographs you've ever loved, even songs and lines from poems walk with you too, insinuating themselves into your decisions about what you'll make your photographs of, and how you'll shape them as pictures. The process, if anything, is intuitive rather than the product of planning—although the fact that very few people have been able to produce this kind of work at a high level also suggests how difficult it is. In other words, intuitive may not be an adequate word for describing the stew of wildness, dogged work and hard thought that goes into producing the best of this kind of photography." (From an interview in Bomb Magazine )
Posted by Tim Connor at 4:47 PM
Email ThisBlogThis!Share to TwitterShare to FacebookShare to Pinterest

I'm enjoying your blog so much. The Papageorge piece so interesting, Tim-

I love the last quote you used here. We do carry so much with us when we look at the world, never mind when we photograph it.

I have a great fondness for slice-of-life images. As humans, we love to look at other humans. That's how we're built. I have mixed feelings about many "street shots" of strangers though. On the one hand I think most of what's out in the open is fair game. On the other I hate it when photographers use the power of a camera to ridicule individuals. One approach I really like is Ron's (Av producer)of abstracting to the essence of movement/posture/interaction. My version of that is to use images that don't reveal faces. I have lots of walking/running away images.

Another approach that I'm comfortable with is working close enough to be part of the scene and in plain sight. One of the things I have liked about your people shots is that it's clear you are seen and acknowledged by the subjects. I have decided to assume I have implicit permission when a person has seen me taking the picture, has every expectation s/he might be in it, and has not recoiled or objected. Usually I will engage afterwards, even if only by making eye contact and smiling. When I have shots that do not fit these conditions I try to somehow make them anonymous by post-processing. I rarely make "spy shots" public if the individual is fully recognizable.

And yes, photographing kids is really a difficult issue these days.

Christine, It sounds like you've thought it through, which is the important thing. My practice is pretty close to yours, though I would not use post-processing to make individuals anonymous. On photojournalistic assignments I have sometimes been more aggressive. Tended to fire away when I felt it might be part of my story. Convinced myself I "needed" a shot. Wasn't comfortable with that. Perhaps the reason I backed out of hard news very early.

It inspired me to talk about my experiences with street photography and to finally show some of it. See it here if you like. Cheers.