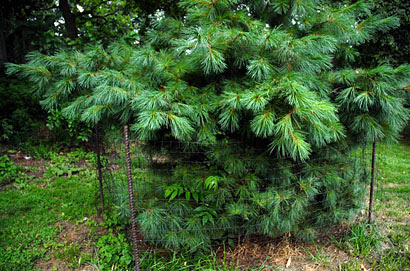 "Caged pine," Tim Connor, All rights reserved
Posted by Tim Connor at 12:13 AM 1 comment:
Email ThisBlogThis!Share to TwitterShare to FacebookShare to Pinterest

Permit? To make a video?

Here's a great YouTube response by Juliana Luecking (aka Queen Juliana)to the Mayor's proposed restrictions on shooting in public places. 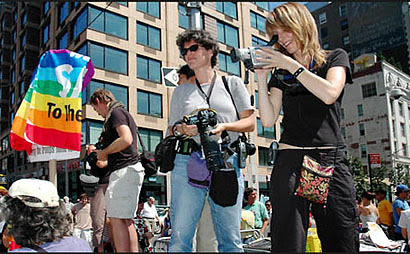 Rally in Union Square tomorrow, Friday, July 27 at 6:30 pm to protest remarkably stupid new rules that have been proposed for filming and making still photographs in New York City. Read about the rules here.

Sign the petition here.
Posted by Tim Connor at 4:44 PM No comments:
Email ThisBlogThis!Share to TwitterShare to FacebookShare to Pinterest 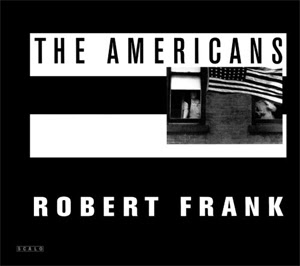 When bloggers refer to Robert Frank, they usually mean his still pictures from around the time of The Americans, one of the most important photo books of the last century. Given the ubiquity of Frank's influence, it's a shock to remember that it was first published nearly 50 years ago.

I first saw The Americans when it was republished in 1969. I wasn't a photographer yet, but its pictures were a revelation to me. They were dark & ferocious. They broke all the rules. There was a sense of the consuming strangeness of being an outsider looking into scenes whose participants saw nothing at all strange. I had never felt this kind of excitement -- mixed with discomfort & even fear -- in photographs before. I wondered what made them so different. They were completely unlike the pictures I had previously admired, which were perfectly composed & intended to mean only one thing. In those pictures the photographers had seemed to be in complete control. But Frank had let go of that. He had volunteered for the vulnerability of being a stranger. As a triple outsider (Swiss, a Jew, a New Yorker in the outlands), Frank had allowed the world to wash over fresh eyes and mean what it means, not what he -- or we or anyone -- decided it should mean.

Surprise, it didn't mean only one thing anymore. Welcome to the sixties. 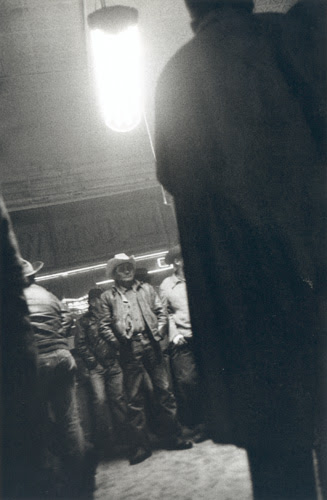 I have always carried in my head one picture from The Americans of a bar in Gallup, New Mexico. Tilted, blurry, glimpsed between indistinct silhouettes, dominated by a glaring overhead bulb, it shows rough men in jeans & cowboy hats standing at a bar. It's a spy shot really, taken warily, possibly a hip shot. The awkward angle & unheard-of tilt emphasize the photographer's urgency. The picture has a drunken, transgressive quality.The ugly room & grainy print let us know we're in the lower depths. Yet the composition recalls a high-noon showdown, a classic & ultimately noble shootout between a good cowboy & a bad cowboy. Except the man facing the camera is an Indian.

Here's a true story: In 1970 I passed through Gallup on my way to the West Coast. A major Native American pow-wow was underway -- dances, a rodeo, trading, sports & socializing. Indians from many tribes were there, along with a few white tourists from a nearby RV camp. At night the main street, which was one long lineup of bars as I remember it, was full of Indian men. The tourists were nowhere to be seen. The Indians were drinking hard. Outside the bars, cops waited in parked cars -- a surprising variety of cruisers & uniforms -- I supposed they were tribal police in addition to local, county & state. I drank a couple of beers in the bars, but I was acutely self-conscious. The drunkeness was frightening. In the hour or so I was there I saw two fights break out. I retreated to my car & campsite. 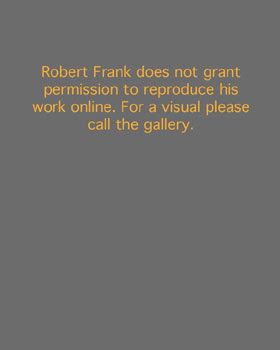 To my mind The Americans is a work of contrarian genius. But the contrariness doesn't end there. After he made the book, Frank turned primarily to making movies. When the book finally began to receive critical acclaim in the U.S., he left New York City & moved to a gloomy exile in rural Nova Scotia. To many at the time, his actions seemed inexplicable if not self-destructive. But, unlike his contemporary, J.D. Salinger, who became a recluse in New Hampshire after his novel Catcher in the Rye became a national sensation, Frank continued to turn out work, both movies and stills. Like another contemporary, Bob Dylan, Frank had no intention of repeating what his fans wanted for the rest of his life. 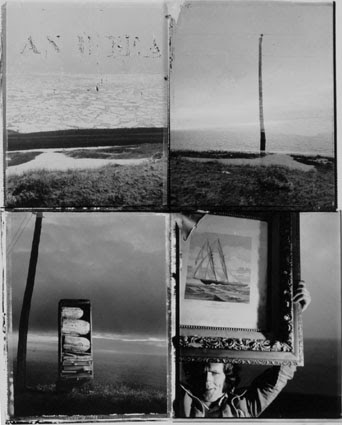 Frank's later photographs are very different from those in The Americans. Still black and white, with a taste for underexposure, using large format, polaroids, cinema film, employing narrative, scratched negatives, scrawled & typed words, populated with signposts, land & sea scapes, wild skies and very few people, these pictures seem composed in a dark runic language. The ones I have seen are beautiful, but I don't understand the language. I don't have the key.

My guess is that meaning is no longer the point. The Americans went a long way toward shattering complacent ideas about public meaning. The more recent works seem to say the only meaning is personal -- & even that may be impossible.

Posted by Tim Connor at 9:05 PM 5 comments:
Email ThisBlogThis!Share to TwitterShare to FacebookShare to Pinterest 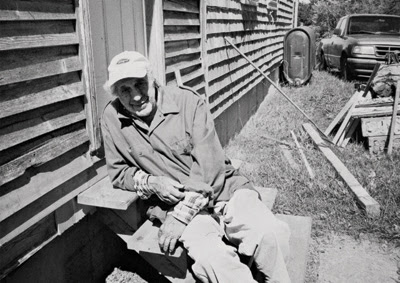 Robert Frank is famous as a still photographer. But in the 1960s and 70s Frank turned to filmmaking -- he made 25 films -- not many people have seen them. From August 3-5 the Center (formerly the Santa Fe Center for Photography) will show 12 of his films. Interestingly, Cocksucker Blues, the notoriously unreleased documentary of the Rolling Stones louche & lonely 1972 American tour, is not one of them (I wrote about it here).

For those who can't get to Santa Fe a surprisingly diverse selection of books & films by Frank can be pre-ordered at photo-eye. The sponsor of the festival, Steidl Publishers, says they plan to issue his complete film works on DVD.
Posted by Tim Connor at 11:49 AM No comments:
Email ThisBlogThis!Share to TwitterShare to FacebookShare to Pinterest

While we're on technical matters, I have a question -- & this is mainly a concern for bloggers. How does one download photos from an Adobe Flash Player 9 website like Almanac's? Is there a way? I found the two Jeff Brouw pictures above on another site, but often that isn't possible. Without pictures it's kind of hard to blog about pictures.
Posted by Tim Connor at 1:00 PM No comments:
Email ThisBlogThis!Share to TwitterShare to FacebookShare to Pinterest 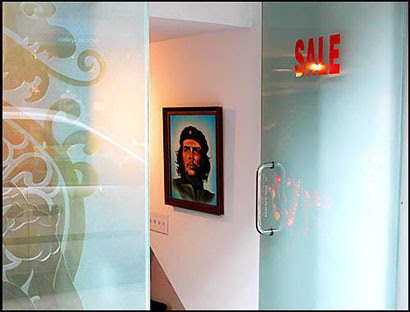 "Che for sale," Tim Connor, All rights reserved
Posted by Tim Connor at 10:57 PM 3 comments:
Email ThisBlogThis!Share to TwitterShare to FacebookShare to Pinterest 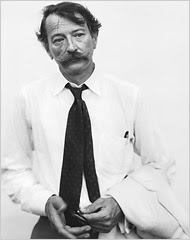 It's yesterday's news now, but I want to note the passing of John Szarkowski (see his obit in the Times). As a photographer, writer & curator, Szarkowksi shaped & presided over the expansion of straight photography's purpose -- from documenting social problems to also understanding the self & the world. He kept this expansion honest. 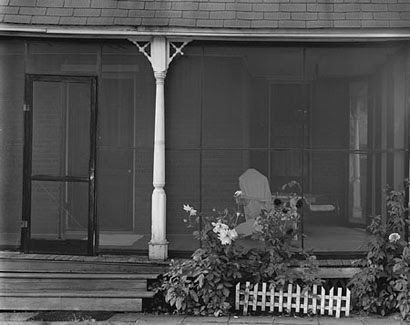 I revered him in the idealistic way one can, having never met someone. My admiration was primarily for his brilliant prose. I didn't really know him as a photographer --I remember seeing somewhere his clear & direct portrait of a U of Minnesota football player & thinking, oh, well, I guess he shot enough to know what he was talking about. But it would be impossible for me to overestimate the importance of his lucid prose to the way I think about pictures. Last year I happened to look at a book of his photos (I'm sorry I missed his retrospective show ). The pictures are as clear-eyed as the words. Like his writing they show a genius for revealing depth & complexity in utter simplicity.

Rest in peace.
Posted by Tim Connor at 12:17 PM No comments:
Email ThisBlogThis!Share to TwitterShare to FacebookShare to Pinterest 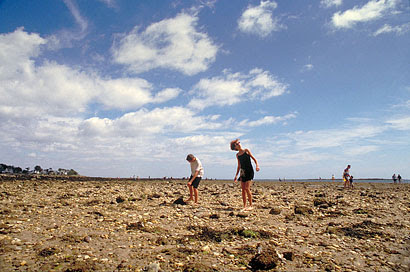 "Carnac," 2005, Tim Connor, All rights reserved
Posted by Tim Connor at 12:19 AM No comments:
Email ThisBlogThis!Share to TwitterShare to FacebookShare to Pinterest

The following item comes to you from NonsenseNYC, a weekly subscriber email described as "a discriminating resource for independent art, weird events, strange happenings, unique parties, and senseless culture in New York City." Wittily written by a guy named Jeff Stark -- who also writes film reviews -- and believes "...there is more to life in New York than getting drunk at slick new bars," Nonsense is a don't-miss read for me, though I have yet to attend one of the events.

I must tell you, however, even in a publication that leads a typical blurb with, "Expect: wild art in hidden places, Bedouin lounges, spontaneous performance, and a late night spectacle featuring arousing angels, kisses from strangers, lost innocence, instant fame, and public scandal by the Lady Circus," the following invitation stands out:

"NYC Chinatown Garbage Taxidermy Tour
You're invited on a free tour of the New York City Chinatown garbage. Did you know you could make art out of dead animals? Yes! I am going to show you how to collect dead animals from the garbage in Chinatown to make your own personal taxidermy. You will learn how to dig in the garbage for dead animals. You can make art out of these animals. It's really cool. I've found everything from sharks to frogs to plain old unidentifiable crap. Sometimes I find nothing interesting, but that is what makes it fun. You never know. Rain or shine.

My name is Nate Hill, a Brooklyn artist who makes new animals from dead animal parts. I sew together random animal parts to make a new animal that doesn't really exist. Many of the parts I have used over the years have come from Chinatown's garbage. I will be holding an 8x11 sign that reads Chinatown Tour.

I suggest wearing clothes you don't mind getting dirty. Long-sleeve shirts are also good to keep your arms clean. Also fully enclosed shoes are recommended. You may want to bring a plastic bag if you want to take a souvenir with you. You may also want to bring a flashlight, though I've never used one. I search by feel. The following items will be provided: latex gloves, first aid kit, wet wipes, and antibacterial gel.Are we going to dive in dumpsters? No sorry. We prefer not to get that dirty. We just dig our hands in trash containers. We're not going to be walking far. The tour consists of my favorite spots that are just within a few blocks of each other.
After the tour is finished, I invite you to drinks at the bar Home Sweet Home (a taxidermy themed bar).

Is it real or prank art? Stark has an opinion, but I'm temporarily omitting it to avoid influencing you. You decide.
Posted by Tim Connor at 12:17 PM 7 comments:
Email ThisBlogThis!Share to TwitterShare to FacebookShare to Pinterest

Teens to Bush: "We do not want America to represent torture." 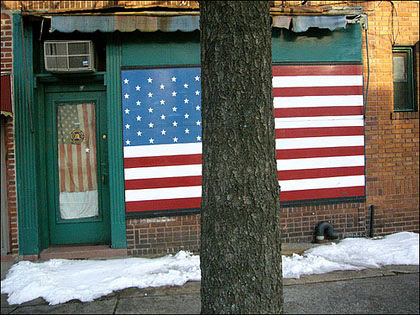 This is a follow up to the item, Mari vs. Bush: TKO to the Kid, which I posted here on Saturday. This morning Amy Goodman of Democracy Now interviewed Mari & another Presidential Scholar, Leah Anthony Libresco, about the White House meeting they had with President Bush in the White House. I think the additional information the two young women share in the interview is very revealing -- & somehow also hopeful on this Independence Day in these dark times.

For story, transcript & video, go here.
Posted by Tim Connor at 12:35 AM 1 comment:
Email ThisBlogThis!Share to TwitterShare to FacebookShare to Pinterest 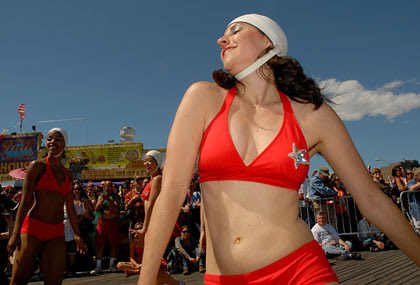