Schjeldahl on Monet: A literary colorama

I read Peter Schjeldahl for his deep knowledge of art & because he dismisses theory out of hand unless it can back itself up. He's there for the art, not the cleverness of critics. It's a minor paradox, perhaps, that someone so besotted with visual glories finds words a sufficient medium to lavish his love. But what words! If he were a painter, I'd say he combines technique, experience & firm intentions with a faith that, through improvisation, inspiration must be sought.
Here's Schjeldahl on Claude Monet's gigantic triptych of water lilies, recently reinstalled in its own room at MOMA. 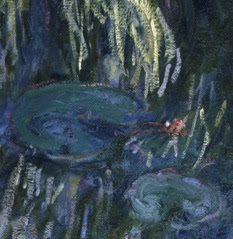 "Water Lilies," Claude Monet
"Get as close as you like to the nubbly surfaces of the triptych, with its candid brushstrokes that skitter and clot; your gaze will stay drenched in an aqueous sublime. Pinkish summer clouds aren’t so much reflected as drowned in turquoise, violet, and mud-green depths. Monet knew palpably, at each point, what all his colors were up to. Everything answers, resoundingly, to everything else. The tone of the next biggest, single-panel panorama is a soprano, silvery shimmer, suggesting water less than polychrome steam. Smaller canvases include 'The Japanese Footbridge'—with its startling reds—and a moist fury of flowering agapanthus. Last one in’s a rotten egg."
Posted by Tim Connor at 10:55 PM No comments:
Email ThisBlogThis!Share to TwitterShare to FacebookShare to Pinterest

Rita Harowitz: Discovering the other 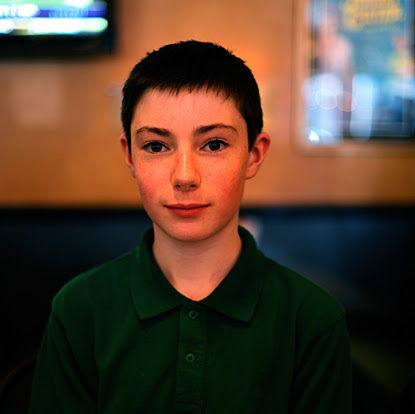 "My brother's son," Rita Harowitz, aka SeenyaRita, All rights reserved

There is no other time in human life as delicately suspended between two worlds as adolescence. Psychologists call it a liminal state -- outside the margins of child- & adulthood, slipping back & forth across the thresholds of both. It is an unbearably awkward time. And sometimes impossibly beautiful.

Look at this remarkable picture by my friend Rita Harowitz. You are pierced by the specificity of the boy, yet he seems somehow unearthly. His eyes shine with real affection, real intelligence, yet Rita's colorist skill & use of shallow focus make him seem to float in a glowing world without distinct boundaries.

Looking, I thought of mythic beings who have, in every culture, existed similarly between worlds.

When I was a teenager, I was fascinated by Irish folklore, particularly by the Sidhe (pronounced Shee), the people of faerie, who live in a kind of parallel universe with humans & sometimes emerge from portals in the landscape, called raths, to feast & battle with other Sidhe hosts. Occasionally too, the Sidhe have dealings with humans -- they bestow gifts & boons, also punish real or perceived insults. Both male & female faeries seduce & sometimes marry humans who take their fancy. Sometimes too, the Sidhe steal away human children, often replacing them with their own faerie children to be raised in human homes (see W.B. Yeats's "The Stolen Child.") The Sidhe, according to the stories, are tall and beautiful, a dream of nobility. They speak in silvery voices, a sound like music. They are like humans in many ways, but they never age & they never die. In Ireland they are referred to as "the gentry" and "the good people" -- though this is always a combination of true admiration and a sly propitiation of their potential wrath. 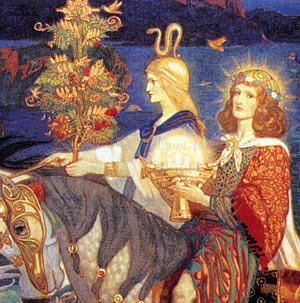 From An Encyclopedia of Shamanism, I found this: "In Celtic faerie lore there is a recurring theme that the beings of the Otherworld need human contact. For reasons that are not necessarily clear, the Sidhe actively seek to share their wisdom, power & secrets with humans. To this end faeries enter ordinary reality to be with humans and cause humans to enter into the Sidhe, into their realm. It is as if it is necessary for the survival of both species that we communicate & help each other."

I make no comparison of course between the actual boy pictured above & the Sidhe. Just that, for me, Rita's picture stirred a connection in my mind. Her artistry framed a moment that, for me, partakes of the same dream that created those Celtic legends.

Today's myths, it seems, are mostly freelance & transitory. Never without irony. Yet it is artists, as always, who reveal them.
Posted by Tim Connor at 12:35 AM 4 comments:
Email ThisBlogThis!Share to TwitterShare to FacebookShare to Pinterest 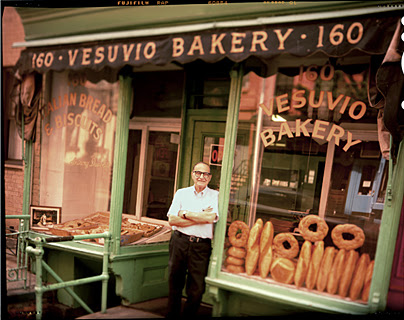 Photographer John Rae sent over this photo of Vesuvio Bakery in its heyday (date uncertain -- probably about 10 years ago). It was shot with a Speed Graphic. Oh that gorgeous bread!

Stay tuned for a post soon on John's amazing photographic year.
Posted by Tim Connor at 10:54 PM 1 comment:
Email ThisBlogThis!Share to TwitterShare to FacebookShare to Pinterest

On a trawler off Point Judith, RI 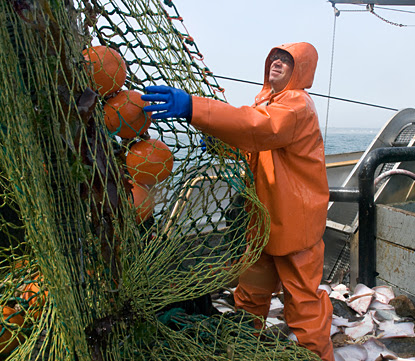 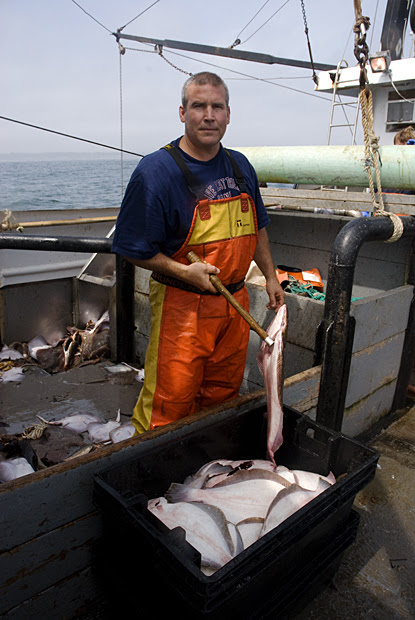 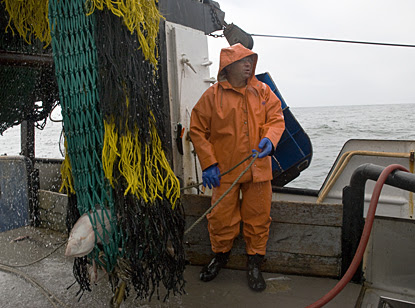 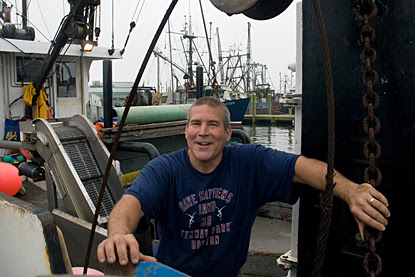 Photos by Tim Connor, All rights reserved
Posted by Tim Connor at 12:02 AM No comments:
Email ThisBlogThis!Share to TwitterShare to FacebookShare to Pinterest 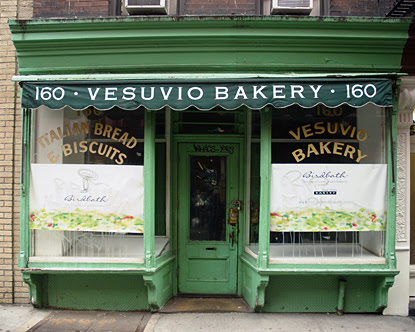 I googled and here's the latest story I could find. Perhaps not so bad -- this time.
Posted by Tim Connor at 10:30 PM 3 comments:
Email ThisBlogThis!Share to TwitterShare to FacebookShare to Pinterest 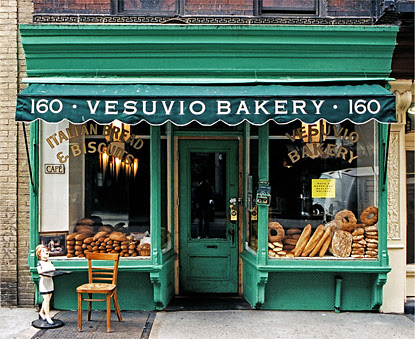 Jim & Karla Murray's "Store Front: The Disappearing Face of New York" show has been extended to September 27th at Clic Gallery at 255 Centre Street in Manhattan. I love the careful, almost formal treatment the Murray's give to these colorful neighborhood outposts -- crisp, straightforward, squared-up, unfussy. The light is chosen & handled for maximum information. Each store front is just what it is. But take a good look! What they are is pretty wonderful...

The Murrays approach these pictures in the tradition of Eugene Atget and Walker Evans, two photographers also moved by the half-improvisatory accretion of visual elements that go into the street face of "mom & pop" businesses. Evans especially was fascinated by signage & the arrangement of goods to be looked at by passersby; he called it "the pitch direct" & photographed it throughout his career. (I wrote about Atget, Evans & signage here).

The Murrays add glorious color to this venerable lineage. They also make a point of adding social & political concerns. These are not just photographs. "The stores have the city’s history etched in their facades. They tirelessly serve their community, sustaining a neighborhood’s diverse nature and ethnic background, in a city with an unmercifully fast pace and seemingly insatiable need for change. Each is as unique as the customers they serve and have at their heart, owners who share a commitment to provide a unique service and in turn cement a neighborhood’s foundation," they write. And, in fact, many of the store fronts the Murrays photographed are already gone, replaced by chains stores bearing the same logo, color scheme & promotional advertising as every other clone of their worldwide corporate brand.