From dust thou art... 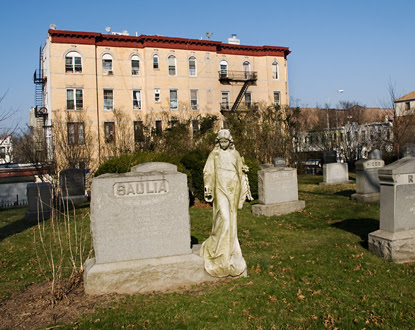 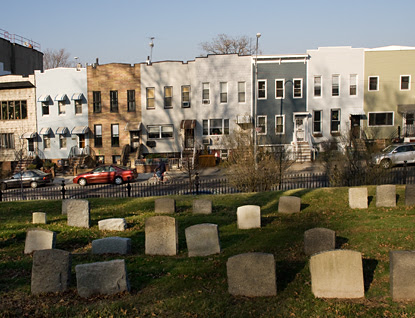 
More pictures of cemeteries
Posted by Tim Connor at 10:39 AM No comments:
Email ThisBlogThis!Share to TwitterShare to FacebookShare to Pinterest

Are you obsessed with dystopia? (definition: "An imagined universe --usually the future of our own world -- in which a worst-case scenario is explored; the opposite of utopia") Or is it just me?

No, it's not just me. I started thinking about this when I realized how many of the books and movies I've read & seen recently are dystopian. Here's a rough list.

Books
Super Sad True Love Story, Gary Shteyngart, 2010 -- World is taken over by 3 mega corporate states. Everyone is the sum of his data. Everyone knows your score for Credit & Fuckability. Talking face to face is so unusual it's called "verbaling."
Sleepless, Charlie Huston, 2010 -- Created from experimenting on genetically modified corn, a mutant virus becomes a plague. The billions of victims will be sleepless till they die.
The Road, Cormac McCarthy, 2009 -- A nuclear holocaust wipes out most of the life on earth. Survivors wander in search of canned food or other humans they can kill & eat.
Never Let Me Go," Kazuo Ishiguro, 2005 -- A first-person story of children raised in a special school. They learn they are clones being raised to supply humans with organs. Eventually they will die on an operating table.
Cloud Atlas, David Mitchell, 2004 -- A book of six inter-related stories. To summarize the last two 1) Sonmi~451, a genetically-engineered fabricant server at Papa Song's diner is interviewed before her execution after she rebels against the capitalist totalitarian society that created and exploited her kind. 2) In a post-apocalyptic distant future. Zachry, a tribesman living a primitive life after most of humanity dies during "the Fall," is visited by Meronym, a member of the last remnants of technologically-advanced civilization.

Movies
Wall-E, 2008 -- A sweet & funny animated film. Also bitingly satirical. Humankind has buried the Earth under poisonous garbage. Everyone has gotten morbidly fat in the spaceships that escaped. They ride around in machines, listening to jingles & shopping. No one remembers Earth.
Children of Men -- At the time of the film, the last child born to humans has just died at the age of 38. A woman with a young child appears & becomes the target of both the totalitarian state in power & the brutal rebels they are trying to crush.
Rise of the Planet of the Apes -- A drug to cure Alzheimer's is mistakenly given to a chimpanzee, who shares it with other chimps being used in lab-experiments. Now they are all as intelligent as humans. As it becomes clear that the released final version of the drug is fatal to human beings, The chimps escape.
28 Days Later -- A mysterious, incurable virus has turned everyone in Great Britain into murderous, human-flesh-eating zombies. A band of uninfected try to get out of London & find refuge in the countryside. (watched a few years ago)

TV series
Battlestar Galactica, 2003-2009 -- In this series ( watched a few years ago)humans have created humanoid machines called cylons. When the cylons become conscious they attack the humans. A series of intergalactic wars ensue.
Jericho -- Only saw one episode. Someone has set off nuclear bombs in the U.S. In Kansas, where the series is set, it's town vs town . Men ride horses & shoot each other as the larger political forces are revealed .

Would love it if you'd add to this list. Comments welcome.
Posted by Tim Connor at 10:06 PM No comments:
Email ThisBlogThis!Share to TwitterShare to FacebookShare to Pinterest 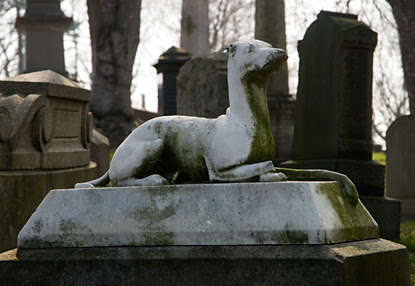 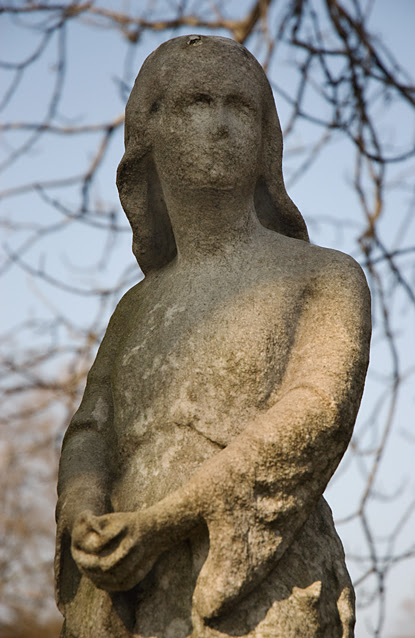 More images from cemeteries worldwide
Posted by Tim Connor at 12:25 PM No comments:
Email ThisBlogThis!Share to TwitterShare to FacebookShare to Pinterest 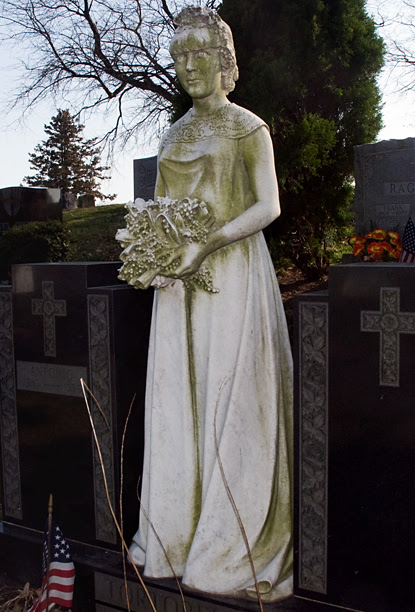 "Lady of Stone, Greenwood Cemetery," Tim Connor, All rights reserved
Posted by Tim Connor at 11:41 PM No comments:
Email ThisBlogThis!Share to TwitterShare to FacebookShare to Pinterest 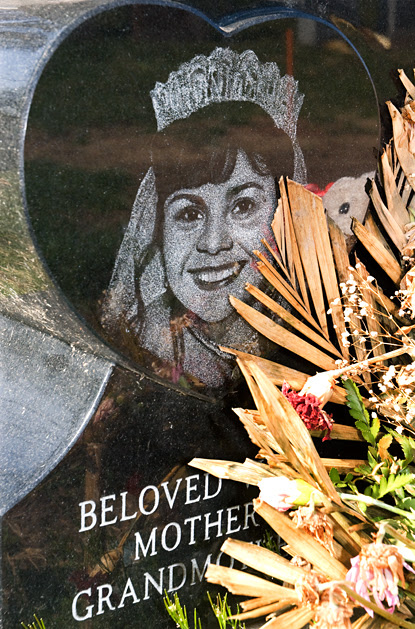 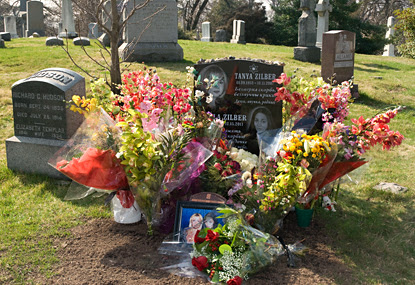 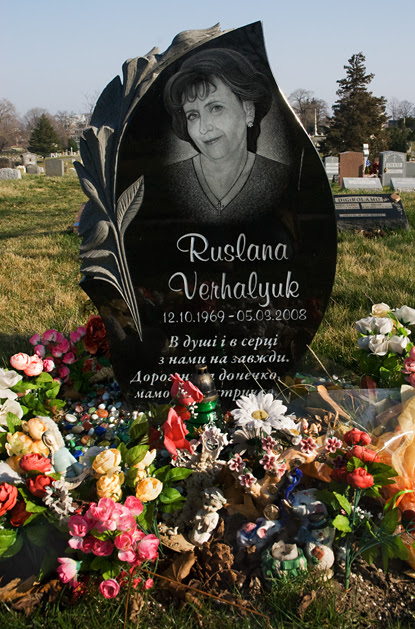 More cemetery pix by Tim Connor
Posted by Tim Connor at 10:19 PM No comments:
Email ThisBlogThis!Share to TwitterShare to FacebookShare to Pinterest 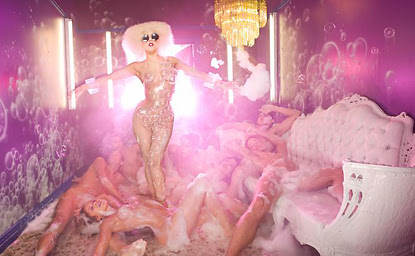 Since Andy Warhol anointed him in the 1980s, David LaChapelle has reigned as the naughty boy of American photography. Unlike Warhol, whose provocations could be tangential and snide, LaChapelle’s outrages are disarmingly direct. In his most famous pictures semi-nude celebrities cavort in richly detailed sprees of lavish self-indulgence and orgiastic simulated sex. In others bewildered-looking models lift off the planet – raptured! -- in a sudden uprush of blown clothing and white light. In still others attractive young people impersonate characters in cracked, religious parables – the Madonna (original version), say, as a bleached-blonde Hollywood starlet wearing only a thong, or Jesus Christ himself, surrounded by deep-ghetto homeboys. One never knows.

"But No Man Moved Me Till the Tide Went Past My Simple Shoe," David LaChapelle, All rights reserved

LaChapelle’s pictures are meticulously created in a high-gloss, color-popping, hyper-realistic style, but no one is likely to mistake them for reality. Even the professional actors who appear in these fantasies seem compelled to chew the scenery. Their performances may be inevitable, given the sets, hair, wardrobe, lighting and props, which push past fabulous into giddy realms of extreme high camp. Yet the pictures somehow work. Despite the sleek narcissism, rampant nudity and wall-to-wall gender-bending (intended to shock), they somehow feel accessible, even good-natured. LaChapelle’s pictures crackle with subversive – or at least hilarious – ideas, rude energy and laughter. They are full of juicy life.

Thus, as a fan, I take no pleasure in reporting that LaChappelle’s latest show of 10 large floral still-lifes, “Earth Laughs With Flowers,” is a bore. According to the gallery’s press release, the show is the latest result of LaChapelle’s decision in 2006 – having already conquered the worlds of fashion photography, celebrity portraiture, music video and documentary film – to “minimize his participation in commercial photography and return to his roots by focusing on fine art photography.” 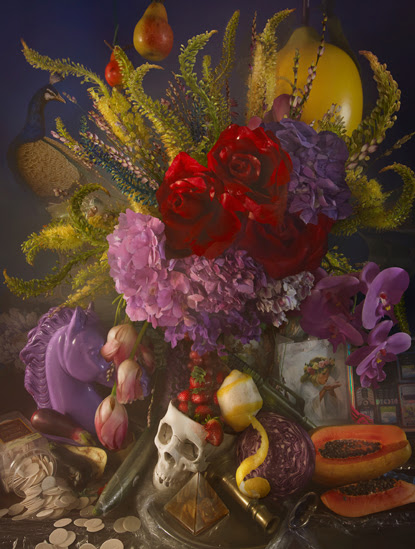 Wait a minute. From Lady Gaga wearing only bubbles to Baroque still life? I do my research. Apparently, LaChapelle’s new photographs were conceived as updates of the 17th century Dutch and Flemish still-life painting genre known as “vanitas.” The name comes from the Book of Ecclesiastes (1:2): “Vanita vanitatum omnia vanitatus,” which translates to "Vanity of vanities! All is vanity." In the 1600s vanitas paintings combined symbols of transitory wealth and pleasure with skulls, rotting food, crawling worms, burning candles and the like. To a religiously conservative northern European Protestant 350 years ago they demonstrated the insignificance of human life and underlined the importance of turning to God.

I try to connect this information with the photographer who lives on a Hawaiian estate with its own private jungle. The one who photographed a naked Paris Hilton tied up in microphone cord bondage and Elton John leaping from his spotted piano into a cluster of cheetahs. The photographer who, in fact, seems to understand contemporary excess, vanity and what Divas of both sexes want better than anyone around.

Did LaChapelle just run across this stern idea in a book on art history? Does he really expect us to believe he made these photographs to warn us against the pitfalls of vanitas?

I hope not. LaChapelle doesn’t need some bogus-scholarly art historical imprimatur to justify his work. And he has no business adopting high-minded moral stances about “the transience of earthly possessions” or “the fragility of humanity.“ He’s a photographer, not a philosopher, and, let’s face it, possibly the last person on the planet who should be mounting the pulpit with dour old Dutch preachers to intone, “All is vanity.”

His entire career has done that! And very nicely, too. He’s our Cecil Beaton with skin and a sound track, whose theatricality dazzles and delights us. 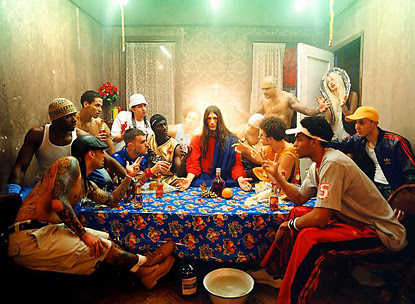 "Jesus Is My Homeboy," David LaChapelle, All rights reserved

This show is a letdown from LaChapelle’s usual standard. But -- lose the musty art history references -- and it’s not without its charms. There’s a certain pleasure in standing back from the gorgeous grab bag jumble of these colorful, beautifully lit, six-foot-high studio productions. There is further fun in moving in close to the prints and discovering all the tchotchkes tangled up with the fruit and flowers -- multi-colored cell phones, styrofoam skulls, smouldering cigarettes, glitter-covered plastic bugs, Get Well and Good Luck balloons, a torched American flag, silicone prosthetic boobs, half-empty Starbuck’s iced coffee cup with branded green sipping straw, see-through ceramic phallus, pill bottles, squirt gun, Barbie dolls, raw chopped-off chicken feet in ziplock bag and, of course, many, many more. 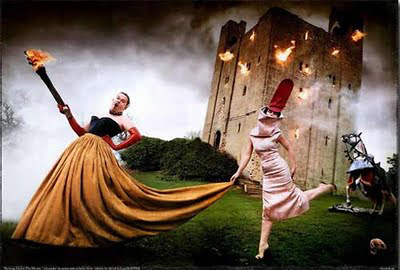 In LaChapelle’s world of absolute excess, there is nothing quite like total immersion. In fact, after several bemused minutes admiring the ruby red roses at the center of one composition, I realized the rose petals were molded in wax . I quickly scribbled in my notebook, “Glorious kitch” (sic). And I’m not ashamed…