Every story tells a picture (2) 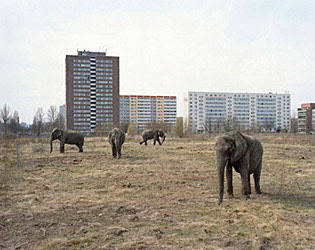 I ran across this gem by the great Mitch Epstein on a preview page of prints to be sold at Aperture Foundation's auction. What a revelatory image of post-colonial Africa! Its startling, absurdist juxtapositions, its irreconciliable clashes between nature & development, past & the future -- all here.

See the first 'Every story'... post.
Posted by Tim Connor at 10:20 PM No comments:
Email ThisBlogThis!Share to TwitterShare to FacebookShare to Pinterest 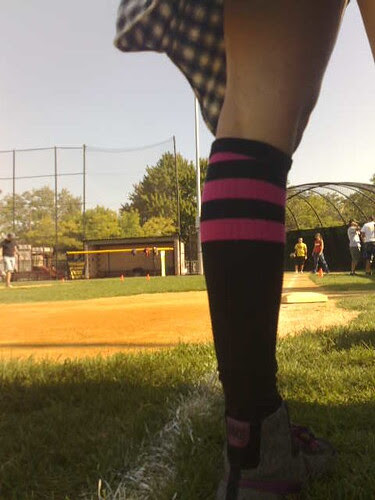 The latest tech toy advance toward total digital hegemony in the mulitverse is a bike that takes pictures & links them to GPS maps worldwide. I heard about this bike via flickr's own irrepressible photog-around-town dogseat (aka Eric Harvey Brown). As part of an incomprehensible (to me) Yahoo campaign known as Start Wearing Purple , dogseat is piloting a specially designed, purple camera-bike around his regular haunts in Jersey City, Brooklyn & Manhattan. In motion, the bike takes a picture & records GPS data every 60 seconds. Simultaneously, similar purple bikes are cruising the streets & roads of selected locations in the U.S., Canada, Australia, Asia & Europe.

To see pictures by dogseat's bike, click here. Don't forget to also click on the "Map" link. It's an interesting exercise, although personally I got bored pretty quickly.

I'm guessing that -- depending on age & inclination -- you might be exclaiming "Sooo cool!" right about now. Or you might be grumbling "What for?" My own response is somewhere in between. The ongoing development of web-linked digital imaging & fast accurate global positioning systems is increasingly useful & even potentially visionary. But I've grown tired (more than tired) of glitzy, market-driven gee whizz rollouts that seem to meet no resistance from an increasingly atomized public consciousness. I keep wondering if I'm the only one who thinks, "OK, I'm supposed to greet this new digi toy as indispensable & use it all the time because I can, but how, really, does it change my life for the better?"

An example. Every day as I walk the streets, fully half my fellows at any one time, on any sidewalk anywhere in the city, are listening or talking intently into miniaturized, wireless, globally-connected phones that were barely dreamt of 10 years ago. Totally absorbed, they pay no real attention to where they are or who is with them. Their imagination is focused on a conversation with a person whose physical reality may be thousands of miles away. Is this automatically better than talking to a companion, thinking their own thoughts, looking, listening, smelling, feeling the place they are?
Posted by Tim Connor at 5:51 PM 5 comments:
Email ThisBlogThis!Share to TwitterShare to FacebookShare to Pinterest

Every story tells a picture 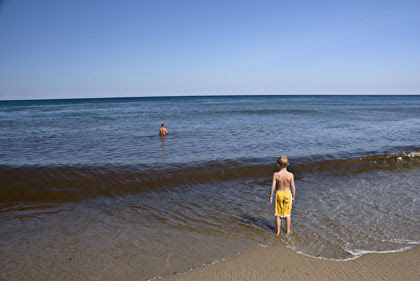 I didn't know this boy or the man out in the water, but when I went to title the shot I naturally wrote, "Boy & dad." It's remarkable how stories seize us. Now it's hard for me to imagine these two outside a father-son relationship. There's no actual evidence, just a hunch based on body language & memory.

In her comment on my Flickr page, my friend Christine astutely observed the boy's stance: "...the shoulders stiffened with resolve and perhaps pride, but every muscle stopped from any forward motion..." , which convinced me anew. But does the picture really depict a son & his father or do we just want that to be true because it helps make sense of the world?

See a larger version.
Posted by Tim Connor at 1:38 PM 2 comments:
Email ThisBlogThis!Share to TwitterShare to FacebookShare to Pinterest 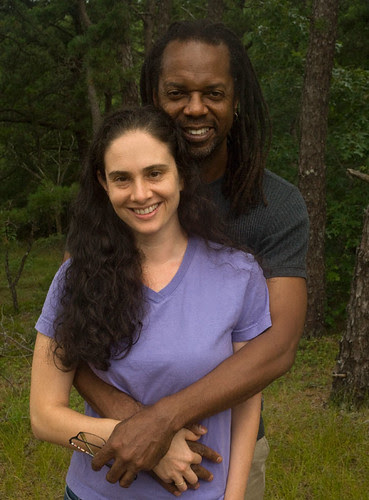 Ruthie & Bill got married last weekend. Today Ruthie linked from her wonderful Spoonbread for Hieronymous blog to my recent Flickr rave review of the wedding. Like everything on the blog, her post, Wedding Spoonbread Redux , is about food. Ruthie -- among her many other accomplishments -- is an amazing cook. In Bill -- a renaissance man in his own right -- she has found her essential counterpart, an enthusiastic & deeply appreciative eater.

If you like to eat (who doesn't?), check out Spoonbread. Called a "family cookbook," it has warm, clear prose, great pictures & recipes to die for.

And BTW for directions & info about my Atlantic Ave.-Pacific St. subway station photos that Ruthie mentions in her post, go here (but ignore the dates).
Posted by Tim Connor at 2:08 PM No comments:
Email ThisBlogThis!Share to TwitterShare to FacebookShare to Pinterest

A poem for the Republican nominee 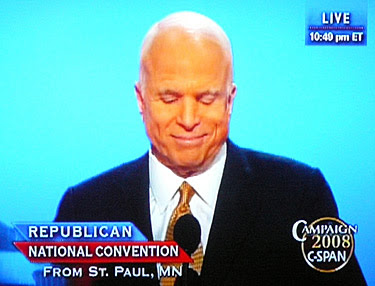 I tried to persuade a porcupine to uncloak its quills,
become pettable, enjoy the human touch.
Who knows what came over me?
Perhaps Fox News.

Will Nixon is an old friend of mine from Manhattan who now lives & writes poetry in the Catskills. This little gem is from his terrific new book, My Late Mother as a Ruffed Grouse, from Foothills Publishing. To see the cover, read the title poem & order a copy, go here.


Posted by Tim Connor at 11:46 PM No comments:
Email ThisBlogThis!Share to TwitterShare to FacebookShare to Pinterest 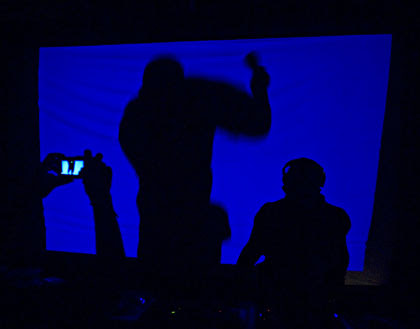 
Barack Obama is right when he says this election is not about him; it's about us. Specifically, this election will answer the following question: Are the voters -- that's us, the endlessly self-congratulating "American people"-- stupid enough to get flim flammed a third time? Elected twice, George W. Bush has done more damage to our so-called democracy than any president in our history. Now Bush is passing the mantle to Karl Rove's next disciple. John McCain. The name is different; the game, apparently, is the same.

The old adage has it "Fool me once, shame on you...fool me twice, shame on me." The folks who coined it never imagined anyone would be dumb enough to require further instructions .


But consider: the polls currently show a very tight McCain-Obama race. Then consider the following , as Obama & the Democrats go up against the Republicans a third time, after 8 years of corrupt & incompetent misrule.


1) The economy is tanking. By eliminating all pesky regulation , the Republicans have socked away immense personal fortunes & left the taxpayers with the bill, including the largest national debt in history. Recently, the feds were forced to rescue the Wall St. investment house Bear Stearns & the mortgage giants, Fannie Mae & Freddie Mac, who, because of their reckless, greedy lending practices, would otherwise have gone under . Now the Times tells us that Lehman Bros. is next. Oh & did I mention that the CEOs who led the pillaging at these firms now expect to walk away with multi-million dollar bonuses? Or that unemployment is sharply up, poverty rates are up, middle class wages & benefits are down, have been going down steadily for 8 years? Or that 43 million people without health care insurance are one major illness away from complete financial ruin?

2)The war is not ending. Bush has finally approved the withdrawal of 8,000 troops from Iraq by February, the month after he leaves office. That leaves 138,000 to occupy the country. As McCain & Palin & Bush bray about victory (didn't we already Accomplish That Mission?) a Marine battalion and an Army brigade that were scheduled to go to Iraq will instead deploy to Afghanistan. Over 5,000 Americans have died in Iraq; many more are horribly maimed, physically & mentally. A country that didn't attack us & had nothing to do with 9/11 has paid even higher human costs than we have & seen its land torn up & destroyed. The war has cost nearly a trillion American dollars, most of it borrowed from the Chinese. Incredibly, McCain & Bush now argue that this is really a success, a win for our team ("USA! USA! USA!"). Oh sure, in Iraq & throughout the Middle East the U.S. is now universally loathed, Iran has become dominant in the region, Islamic terrorism is having a banner year & there's a bombing most days that splatters 10-50 people all over the landscape. But, hey, that's so much better than it was just a few months ago, remember?


3) Every day lately in this campaign, John McCain -- Mr. Straight Talk Express -- tells outright lies. These are weirdly easy to check out. But, when shown the obvious proof of his lies, McCain repeats them with a serene smile. This is the man who was smeared by Bush and Karl Rove in the 2000 Republican primaries (they insinuated that his adopted daughter, a Calcutta orphan, was the result of an extramarital liaison with a black woman). Yet today on YouTube I heard McCain intone his approval of a nasty new attack ad that shows a smirking Obama behind text that claims he supported "comprehensive" sex education for kindergarten children. This is slander of a particularly grotesque sort.


4) McCain's slide into nihilism, if it didn't begin then, has at least sharply accelerated since he named the ridiculously unqualified governor of Alaska, Sarah Palin, as his running mate. You can read about the Palin choice elsewhere (if you don't know where to go, try here.) To me perhaps its most appalling feature is that by making the pick, McCain whores out his long-held & genuinely honorable stand on global warming . Here we are with the 4th tag-team hurricane in a month about to make landfall, permafrost melting & puffing out methane, innumerable species facing extinction, seas warming & rising, glaciers shrinking , Arctic ice receding so fast even conservative scientists are predicting that the North Pole will be open water in 30 years & the one Republican senator who had been willing for years to stand up & tell the truth about it -- John McCain -- has thrown in his lot with the anti-science bible-thumpers & big-oil publicists who claim global warming is not happening, it's just liberal propaganda, there's plenty of oil & coal left, so trust us, we'll go get it for you...


OK, cynical plutocrats like McCain & his money backers, I understand why they're pretending to buy this crap. They stand to get even richer as the world goes to hell ... But who's really buying it? Can somebody tell me?
Posted by Tim Connor at 5:36 PM No comments:
Email ThisBlogThis!Share to TwitterShare to FacebookShare to Pinterest
Newer Posts Older Posts Home
Subscribe to: Posts (Atom)