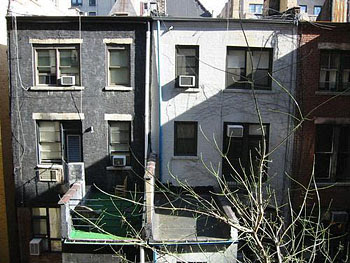 My friend Irene Meltzer Richard (petitesoeur at both fotolog & flickr) will have a show at Le Poulailler, a gallery in Lille, France. Titled "Apt. 615/Daily Views," it records a year of changes & staying the same from the window of her apartment in New York's Greenwich Village. If you're in France between April 14 to May 15, don't miss it.

merci beaucoup for the blurbage
FYI: the gallery is in Lille not Lyons

We are very proud by Irène's coming in France for this exhibition. Thank's for your notice Tim. See you soon in Le Poulailler site :-)

" Photography is about finding out what can happen in the frame. When you put four edges around some facts, you change those facts " Garry Winogrand

"Photography is like sex: the intersection of what you are interested in and what you can get"