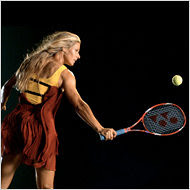 For the article, "How Power Has Transformed Women's Tennis, " in Sunday's NY Times Magazine, a special camera that makes over a thousand exposures a second was used to shoot top female tennis stars in action. The resulting animated videos are shockingly beautiful. I feel I am watching focused inexorable acts of will, performed by young women whose beauty is inseparable from the power they summon. This is hard to explain. Before I say any more, see the video for yourself:

These women seem to me goddesses the way the ancient Greeks conceived them. They are physically & emotionally conjoined to human women; formed from the same template -- but from finer, more perfect materials. Stronger, more beautiful, they are naturally above the mortal plane -- but not separate from it. As immortal goddesses they are somehow more intensely, vividly mortal than their human sisters.

Like their sisters, too, the goddesses have a touching vanity. Their long, beautiful hair is not tied back; it swirls around their faces. Their costumes are each a little different; the styles & colors are carefully chosen. They are jealous, competitive. It is perhaps an important source of their power. And they understand passion -- & vengeance. Look at their faces. Like Hera, the Queen of the Goddesses, they are not above turning a rival's long hair into snakes, or turning their husband's mistress into a cow, then driving her mad with biting flies. 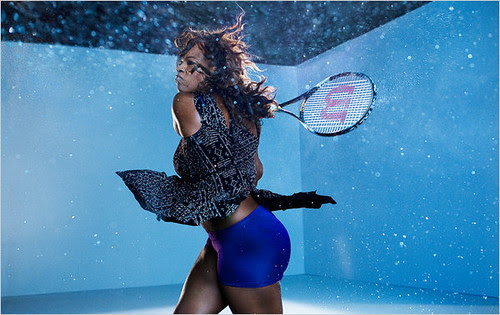 In 1965 or so, before the world went crazy, Leonard Cohen was a poet, not a songwriter. He was actually famous as a poet, at least in the small sophisticated city (Montreal) where he grew up. Seeing this movie made my heart ache because Cohen is exactly who I wanted to be at that time -- I was finishing high school. He's witty, lyric & tender without being soft (I could never have pulled that off). And he has impregnable self-confidence without ever losing his sense of his own absurdity. No wonder the guy later ran away to a monastery for his middle years. Who could have retained any kind of humanhood as the genius rock star hero poet guru prophet lover the media (all of us) wanted to make him into, starting about 1967?

I loved this film. Listen to Cohen talk about hotel rooms and about the generous beauty of women.

Thanks to brother Tony for the tip. Go here for hundreds of other free Canadian documentaries & animations.
Posted by Tim Connor at 10:29 AM 4 comments:
Email ThisBlogThis!Share to TwitterShare to FacebookShare to Pinterest

Will shows a snakeskin he just found 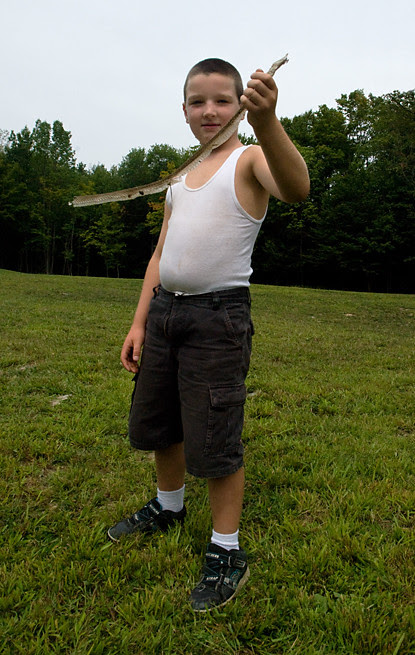 "Will, New Hartford, CT," Tim Connor, All rights reserved
Posted by Tim Connor at 11:32 PM No comments:
Email ThisBlogThis!Share to TwitterShare to FacebookShare to Pinterest

The five pictures that follow are my submission to a group show of closeup works. If accepted, they will appear in September. My artist's statement about this series is at the end of this post. 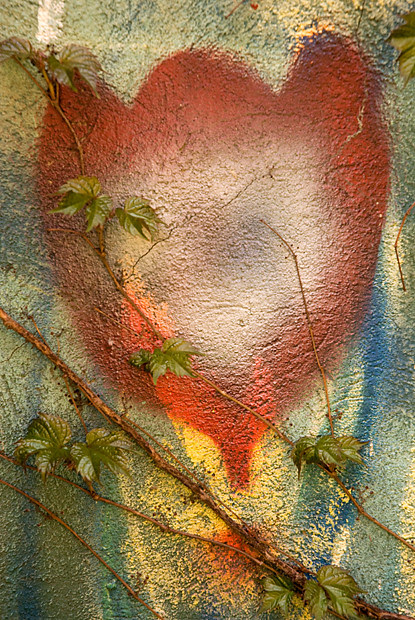 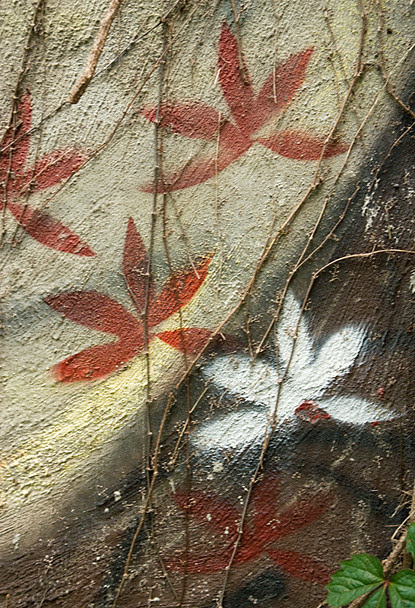 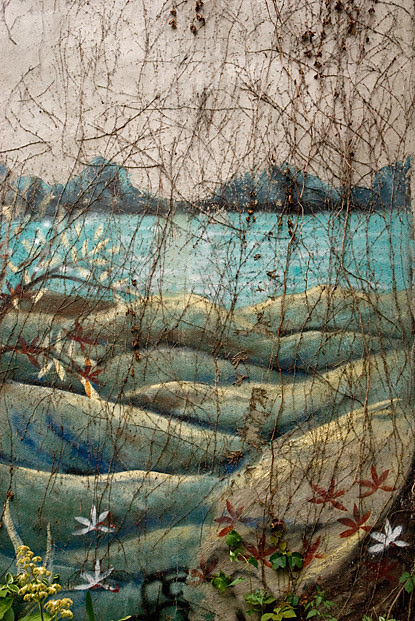 "Trying to get to heaven: Annie's garden," Tim Connor, All rights reserved 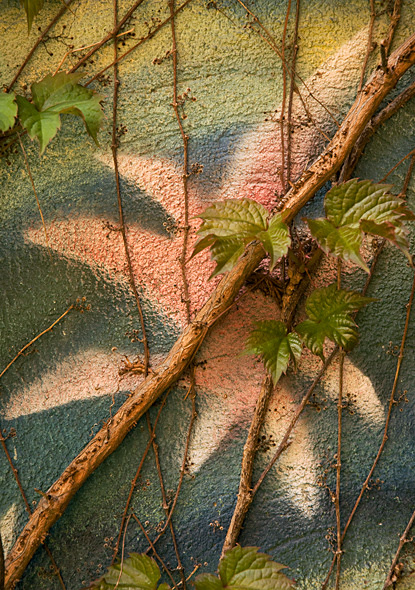 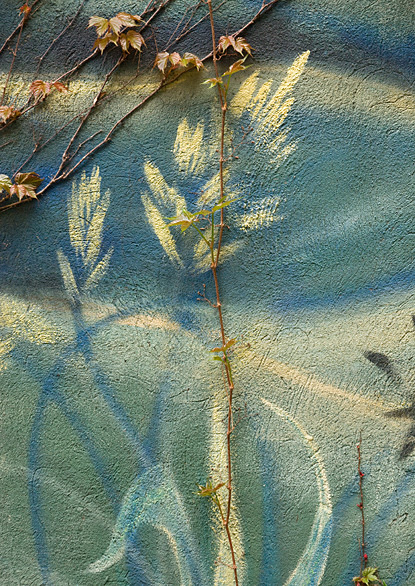 I love it when different kinds of subject matter and forms of representation mix & ricochet off each other. The subject matter of this series of close-ups – from a garden wall painted with landscapes & flowers by an unknown artist, then grown over by actual plants – juxtaposes living nature & its created representations in paint. Framed close-ups of the juxtapositions are then represented by digital photography, which, in its illusion of timelessness, mixes ironically with the series’ themes of (relative) permanence & change.
Posted by Tim Connor at 8:48 AM 1 comment:
Email ThisBlogThis!Share to TwitterShare to FacebookShare to Pinterest 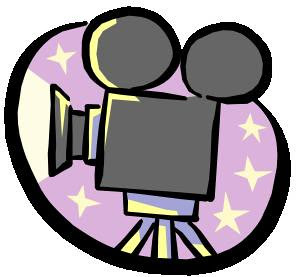 We watched the 1st movie from the new Netflix list (see "Nibbling at Netflix"). It was "Noises Off," from a Broadway play, dir. by Peter Bogdanovitch, with Michael Caine, Carol Burnett & Christopher Reeves. Supposed to be a satire on the theater, a farce of a farce. It got stupider & more repetitive as it went. Yes, we know theater & theater people are professionally unembarrassable. "The play must go on." Bravo. So what? It sucked.

Wins The Grand Raspberry Award. Gets minus 8 stars. Don't watch it, even if you're stuck on a 12-hour flight.

This lovely short film seduces you instead of hitting you over the head. Masterful pacing & a true eye (& love) for faces. Check it out.

Posted by Tim Connor at 11:09 PM 2 comments:
Email ThisBlogThis!Share to TwitterShare to FacebookShare to Pinterest

We love our machines, so we tell stories about them 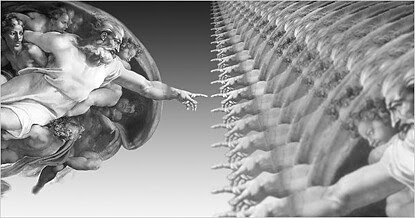 We're all familiar with the well-worn science fiction trope: Humans build a vast network of powerful machines; the machines become sentient & take over the world. Software designer Jaron Lanier doesn't necessarily believe this story, but he thinks it's important. In a recent NY Times op-ed, "The First Church of Robotics," Lanier argues that this machine-mind creation myth is fast gaining currency in our culture as a real -- not sci fi -- near-future event. At the well-heeled & well-connected Singularity University, for example, many of Silicon Valley's technological elite expect that "one day... the Internet will suddenly coalesce into a super-intelligent A.I. (Artificial Intelligence), infinitely smarter than any of us individually and all of us combined." In fact "...these are guiding principles, not just amusements, for many of the most influential technologists," Lanier reports.

Crazy? Who knows. Meanwhile, let's talk about the present. For good or ill, A.I. is seen right now as a new kind of god. I think the idea thrills us. Even if our new god turns out to be cruel (witness the recent explosion of literary & cinematic dystopias), we are ready. Perhaps we welcome AI because we can't help loving our own intelligence. Encoded within the AI, our small isolated stores of knowledge -- our data -- may become part of something much greater. The AI needs us. Thus, the master machines share our humanity & give us immortality.

"What we are seeing is a new religion , expressed through an engineering culture," says Lanier.

What's interesting is that Lanier makes this provocative point as an unreconstructed engineer & Silicon Valley insider. When he says that IBM -- which recently unveiled a question-answering computer designed to play the TV game show 'Jeopardy' -- could have "...dispensed with the theatrics [and] declared it had done Google one better and come up with a new phrase-based search engine," he clearly knows what he's talking about.

Not that we don't all understand why IBM listened to its ad people. Just a search engine? How boring. Why not a talking machine, a smart robot, something like a ... person? Think R2D2. Think WALL-E. Let's face it, there's something irresistible about those little mannikins. Even their old neurotic granddad, HAL, felt like part of the family. What's not to like?

Lanier warns that our identification with our technology is "allowing artificial intelligence to reshape our concept of personhood... we think of people more & more as computers, just as we think of computers as people...The very idea of A.I. gives us the cover to avoid accountability by pretending that machines can take on more and more human responsibility," Lanier says.

What a bummer this guy is! He's no fun at all. But, hold on, his suggestions of what to do about the fatal attraction of man & machine aren't really radical. For example, listen to his comment about the recommendation software on Netflix or Pandora: "Seeing movies or listening to music suggested to us by algorithims is relatively harmless, I suppose. But I hope that once in a while the users of those services resist the recommendations; our exposure to art shouldn't be hemmed in by an algorithim that we merely want to believe predicts our tastes accurately. These algorithims do not represent emotion or meaning, only statistics & correlations."

Spoken like an engineer. Factual. Unembellished. This is the way Lanier thinks we should look at our technology. What he's warning against is the way artists (& clergy) -- who typically know next to nothing technically -- look at it. They make up stories, invent metaphors, assign meanings. It's not very likely, after all, that a true scientist will fall in love with his iPhone. He may find it useful; he may admire it. But he is not likely to adore a mere tool. It's the artist who is smitten, who praises his iPhone every day, who thanks it for its loyalty & brilliance, who regards it as his secretary, amanuensis, his dear little friend.

"Technology is essentially a form of service," Lanier counters. "We work to make the world better. Our inventions can ease burdens, reduce poverty & suffering, and sometimes even bring new forms of beauty into the world. We can give people more options to act morally because people with medicine, housing and agriculture can more easily afford to be kind than those who are cold, sick and starving... But civility, human improvement, these are still choices. That's why scientists & engineers should present technology in ways that don't confound those choices."

And finally: "When we think of computers as inert, passive tools instead of people, we are rewarded with a clearer, less ideological view of what is going on -- with the machines and with ourselves."
Posted by Tim Connor at 6:14 PM 5 comments:
Email ThisBlogThis!Share to TwitterShare to FacebookShare to Pinterest

My review transmutes to ink on paper 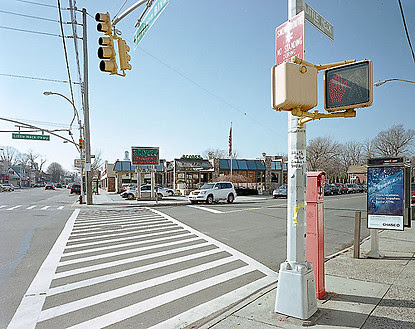 The picture above is from "On Their Sites: landscapes with private monuments," a fascinating project by New York-based photographer Zheng Yaohua (known as zeyez on Flickr) that explores private memories as they attach themselves to specific places. I am honored that a short essay I wrote about Zheng's work was included in his recent brochure about the piece.

You can read my review here.

The photo/childhood memory about George Tenet that I analyze is here.
Posted by Tim Connor at 11:17 PM 1 comment:
Email ThisBlogThis!Share to TwitterShare to FacebookShare to Pinterest
Newer Posts Older Posts Home
Subscribe to: Posts (Atom)