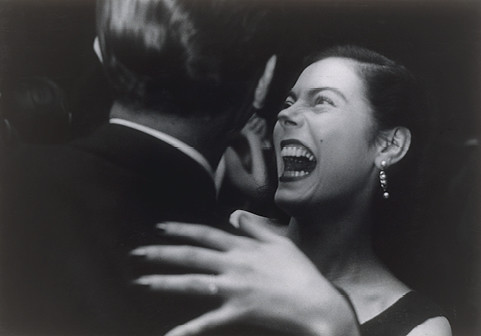 
Pace McGill’s Garry Winogrand show, “Six,” might be thought of as a kind of Cliff Notes for the full-dress Winogrand career retrospective running this summer at the Met.  At Pace McGill, Winogrand’s well-known prints are large and crisp, and the crowds are minimal, but how much, after all, can one learn from an outline?

Six images have been chosen for each of six categories  -- Animals, Public Relations, Street, Women, Central Park and Texas.  Aside from providing the title for the show, this 6 X 6 arrangement seems arbitrary and unimaginative for work that openly – even ferociously -- eschews any kind of shot-list mentality or after-the-fact categorization.  But perhaps curation is beside the point. These are Winogrands, and Pace McGill wants to sell them (11” x 14” print prices range from $5,000 to $65,000 – most are around $10,000).

To me, those prices don’t seem terribly high in this crazy art market. After all, John Szarkowski, the great photographic critic and kingmaker of the 1960s and 70s called Winogrand “…the central photographer of his generation.”  To be fair, this was by no means a universal assessment at the time – nor is it today. But I agree with Szarkowski, at least to the extent that Winogrand personified, more than any of his contemporaries, a major attitudinal shift toward photography that is still underway. 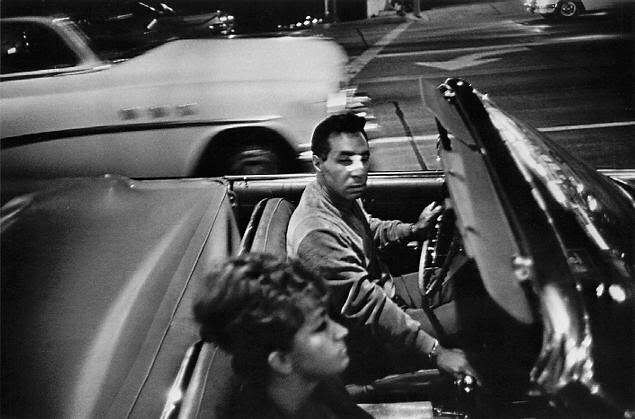 
Winogrand’s career developed within and against the ideas of an earlier generation of documentary and photojournalistic photographers who believed the best of their work could accurately describe social and historical truth and sometimes even change it. From Lewis Hines through W. Eugene Smith (and continuing today) their theory goes: shine a bright, public light on injustice, and you begin to attack and eliminate it.  This theory was underpinned by optimism. We are all humans with shared needs, problems and joys. And great photography proves it. This was the message of “Family of Man,” the legendary exhibit curated by Edward Steichen, mounted at MOMA in 1955, and then shown around the world.

In fact, Steichen selected two of  Winogrand’s pictures for “Family of Man.” But, from the beginning of his career, it was clear Winogrand was not that kind of photographer. His passion was for the photograph itself -- not for what it represented or could do. He was interested in human stories, but his stories resisted moral judgments.  They could be ambiguous. It was as though he invited viewers to provide their own captions.

He went out in the morning to make great pictures but had no idea what they’d be. By way of journalistic intention, he followed his interests and obsessions. He went to places and events that he thought would serve him, then, instead of “covering,” them, reacted to whatever caught his attention. He felt no imperative to ask permission before or take moral responsibility after taking a shot. His frames were always sliced from reality, but they took no credit for being reality. Szarkowski called Winogrand’s images “figments of the real world.” First and last, they were pictures. 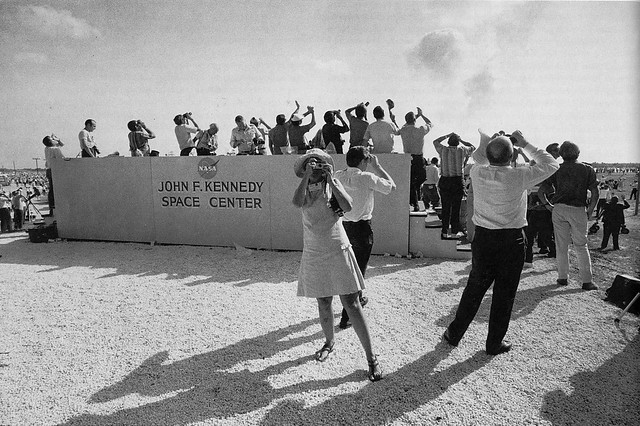 "Kennedy Space Center, Florida, 1969" by Garry Winogrand
Winogrand is famous for saying, “I photograph to see what something looks like photographed.” And he meant it. The idea was not to take sides or advance an agenda but to discover what his camera had seen.

An example. Winogrand was against the Vietnam War. Yet his best-known shot of the protests, “Peace Demonstration, Central Park, 1970,” displayed in the exhibit’s Central Park section, shows a dark, gloomy day on Manhattan’s Great Lawn. In the foreground is a spindly, leafless tree. Around it and stretching to a horizon of East side buildings, a vast crowd of anti-war demonstrators sits or lies huddled on the cold ground. The sky above the protesters is thick with newly-released balloons that read as black in the black-and-white print. Perhaps the real balloons were red, not black, against the darkening sky that day. Or perhaps – let’s fantasize -- they were bombs falling. We really don’t know from the picture, just as we don’t know why the crowd is so passive about the spectacle 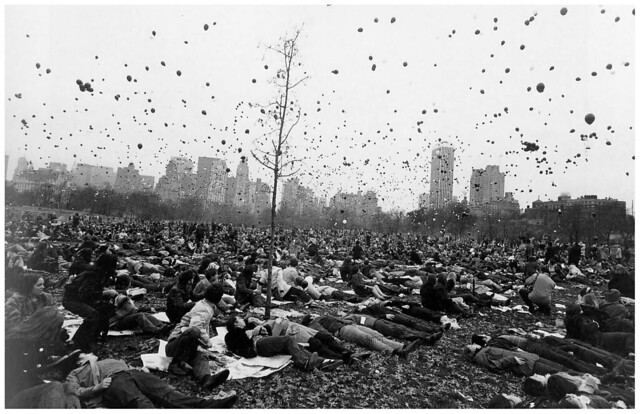 As viewers 44 years later, the scene frankly looks sinister, almost apocalyptic. It goes firmly against our received idea of what an anti-Vietnam War demonstration is supposed to look like. Winogrand’s “historical” pictures are often different in that way.

He was in fact a kind of anti-historian. In a 1971 picture, again from the show’s “Central Park” section – and again in cold but snowless weather -- a classic “straight” family of tourists (short-haired father in double-breasted trench coat; wife with hair tied in a scarf; two boys wearing cheap street-bought cowboy hats) stand gazing over five long-haired hippies (hatless, moustached, shades) lounging on the frozen grass. What is the family looking at? Perhaps we're at the outskirts of another demonstration. Why do the hippies so studiously ignore the family? Why do they – the cool insiders -- appear so rattled?   Could it be that, “Somethin’s happenin here but you don’t know what it is…”?  Could it be that Mr. and Mrs  Jones and the kids don’t care? 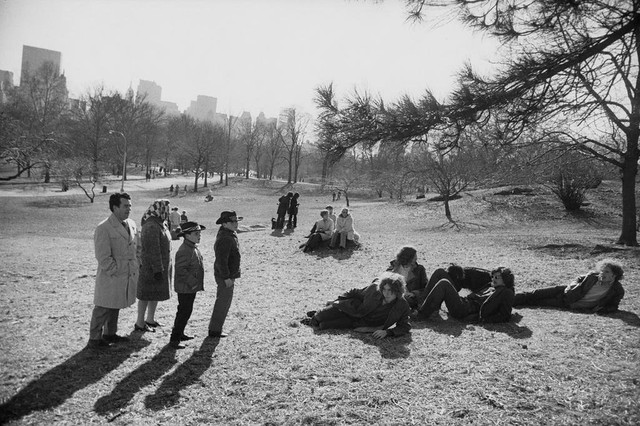 Winogrand shot without thinking too much – more frames, more rolls, than any of his contemporaries.  Then he edited , selecting what he considered to be the best pictures, not the ones he thought would please. For instance, the disturbing “Easter Sunday, Central Park, 1971” shows three young people obviously tripping, surrounded  by a curious, not necessarily sympathetic  crowd.

One man is completely naked. His hands are raised, as though he’s invoking the heavens. The other two, a man and a woman, look agitated. There is no caption describing this scene, but the paranoid-ecstatic, staring eyes of all three trippers -- as though they are seeing god and the devil at the same time – tell the tale. 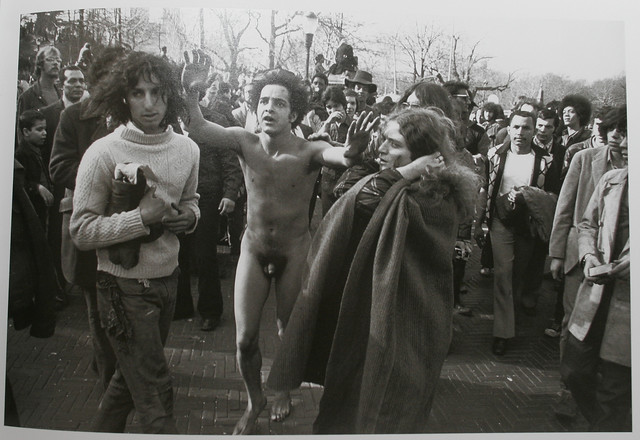 Yes, but why are we looking at this picture? It’s not an anti-drug ad.  It’s also not, in any coherent historical sense, about the event that surrounds it.  In the end it’s just a fascinating “figment” -- at a time when fervently confused religious seekers in New York City might find Easter Sunday an auspicious time to drop acid and attend demonstrations. I guess that’s history too.

Supposedly, Garry Winogrand fell apart as a photographer after he moved to Los Angeles late in life. He continued to shoot but stopped editing, finally even stopped processing his film.  After his death, no less a personage than his old friend and mentor Szarkowski examined the massive take he had left behind – reportedly as many as 300,000 unedited images – and pronounced them unremarkable. Since then, experts at the Met have taken another look and are including some of the unseen shots in their retrospective.

What’s the verdict? Did he lose it? Was he great till the end? I hope so, but it doesn't really matter. Garry Winogrand’s  open-minded, follow-your-instincts, shoot-what’s-there aesthetic recorded the American 60s and 70s like no one else. His example has become the working mode of many thousands of today's shooters – both pros and amateurs -- worldwide. I think it’s safe to say that, working the way he did,  these photographers intuitively understand Winogrand’s  enigmatic dictum: “Nothing is more mysterious than a fact clearly stated.”

This review also appears in the current issue of New York Photo Review.

To read more of my reviews of photography, other visual arts, books and movies, click here.
Posted by Tim Connor at 11:09 PM 1 comment:
Email ThisBlogThis!Share to TwitterShare to FacebookShare to Pinterest
Newer Posts Older Posts Home
Subscribe to: Posts (Atom)