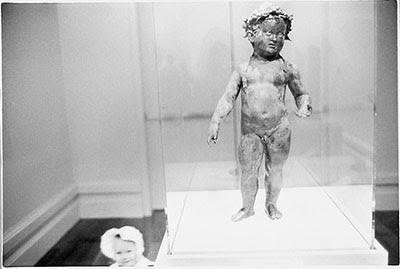 I wanted to see Judy Linn's show, which closed this weekend, because the New Yorker described it this way:

"This survey of thirteen recent photographs—some in color, most in black-and-white—is modest, quirky, and offhandedly shrewd. Like so many contemporary photographers, Linn tends to take pictures of things that are not very interesting: bits of bread scattered on trampled snow, a sunny sidewalk peppered with tiny buds, a blond woman with an extravagant ponytail, a pine tree in a flooded field, a solitary cow. But each image is at once self-effacing and just right. The show doesn’t exactly cohere (what does this woman in bed have to do with that dishtowel?), but no matter; Linn’s scattershot approach feels right on target."

I've noticed that the only shows that don't fit into a catchy concept (the faces of Iraq war veterans, hypnotized subjects, naked mothers & children in the wild, etc.) are by photographers who are at the end of their careers or dead, with names that are already an established brand. Only then, it seems, can imagery be allowed to stray off message or venture into more than one style. I wondered how Linn got away with it.

Alas, I missed the show (it closed this weekend), but here are the pictures online.

And courtesy of Alec Soth's blog, here's some of what Linn says about her work:

"I think when someone first looks at a photograph they automatically wonder, “What is it?” I want a photograph that easily answers that question. I want to be extremely obvious; obfuscation is bad grammar. Hopefully, the two-dimensional arrangements of shapes on the paper will be as lively and interesting as the three-dimensional world trapped inside the photograph. There should also be something there you haven’t seen before. Something should happen in the act of looking.

I want a photograph that makes me aware of what is physically in front of me, a photograph that gives me the pleasure of getting lost. It is like asking yourself a joke: not really knowing what the answer is, giving up, and then seeing the punch line and really laughing."
Posted by Tim Connor at 8:57 PM
Email ThisBlogThis!Share to TwitterShare to FacebookShare to Pinterest