Elaine Mayes: From hippies to hawaii 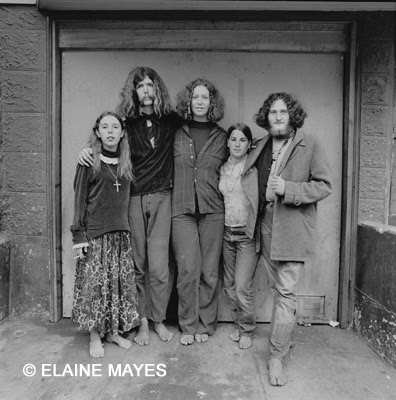 A few years ago at a photo conference Elaine Mayes showed a series of black and white portraits made during the “summer of love” in Haight Ashbury. That famous summer, 1967, I was 20 years old. I hadn’t yet made it to San Francisco, but I was a fervent member of the counterculture. I dropped in & out of school, did various low-paying jobs, wandered around, listened to a lot of music, got high as often as I could. I called myself a hippy. My hair and beard were wild. I wore cast off clothes. I believed our country needed a revolution to make us all free.

More than three decades later, Mayes’s slides showed me what I had seen but in some way not registered back then. Her pictures are skillfully direct -- unpretentious, accurate. For me they were a kind of reseeing -- only lucid this time, not stoned or lonely or in a hurry to get somewhere else. It was like suddenly having memories I didn’t know existed.

The 60s aren’t chic in these pictures. The hairstyles aren’t like the coiffed manes of the musical Hair or all the movies that would come later. The clothes -- mostly picked up on the street or in thrift stores -- often show imagination but haven’t yet become a marketable style. Everyone is so young. Only a few of the faces show the drugs & disillusion that would overtake the scene in just a few years. They are earnest childlike faces -- sweetly idealistic. The only ones that seem rooted in the here-and-now are the young mothers and their babies, for whom Mayes clearly had a special feeling. 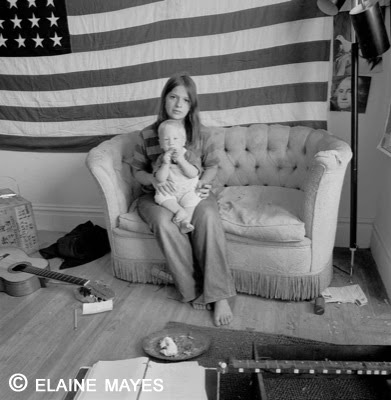 I wouldn’t have thought so before, but these portraits convinced me the 60s are best pictured in black and white.

After the slide show, I told Mayes how much I liked her work. Later she was kind enough to critique a portfolio I had brought to the conference. A longtime teacher at NYU, she was surprisingly soft-spoken, essentially modest. But it was one of the only critiques that ever made me change the way I work. 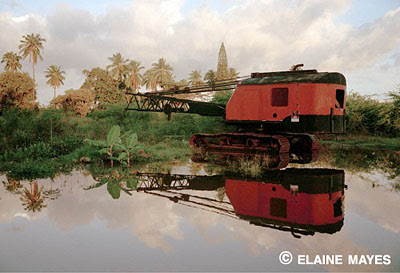 I’m writing this post because I happened upon some of her large-scale color landscapes of Hawaii at the recent AIPAD show in New York. They combine the clear-eyed observation of her earlier work with a surrender to the gorgeousness of island light & color.

It's a pleasure to make her acquaitance again.
Posted by Tim Connor at 3:08 PM
Email ThisBlogThis!Share to TwitterShare to FacebookShare to Pinterest

that first photo is especially riveting.

I didn't realize that you are the same age as me.
In 1967 I travelled all the way out to Berkley in a woody Chevrolet that I bought for $100. What strikes me about the fashions of those times were the comfortable plainess of clothes; the way we all parted our hair in the middle and thought we looked so cool. What is it about black and white photos that always hits the bulls eye when you look back in time ?

I'd be interested to know what she said in her critique of your work and how and why it changed things for you?

Interesting and her work is fascinating. I didn't do the hippie look in those times. I was more almost militant feminist which had it's own style(s). What strange and wonderful days. I still think it's time for all of us to get back on the streets, gray hair, arthritis, and all.

I had exactly the same question as terri lynn

Terri & Christine, It was about color. It was during the period I had named myself "colorstalker" on fotolog. Since I had gained the ability to process in PS & print at home I had been cranking the saturation to 10 or 12 on most colors, going for images that popped & blazed. It was an exaggeration of my real style then -- I was very strongly a colorist & had come to particularly favor the fierce light of late afternoon -- but it was an exaggeration. I had some notion that I wanted to depict a world more intense, more emotional, than the one we walk around in. But I hadn't really thought it through. What I knew was that viewers liked the eye-popping color. It was popular. I was the colorstalker. Well, Elaine wasn't buying it. She praised my images but even though she didn't say so, I could tell the supersaturated prints really bothered her. Her method was socratic -- she never challenged my choices or even gave an opinion, just asked a few questions, & I suddenly realized I agreed -- the cranked colors were a gimmick (for me). They were saying something I didn't want to say about the images. Taking something away from the images. Well, since then I haven't foregone color or my love of harsh dramatic light (hardly). I'm still a colorist, but I think about it differently. I can be happy with a very different look now. And even if it is that late-afternoon raking sunlight on brightly painted walls kind of image, I rarely do more than lightly tweak the colors now, almost never crank the saturation of any color past 4 or 5 & often not at all.

So I hope that answers your question. Thanks for asking.

Interesting how sometimes what viewers like can cause us to alter our artistic vision.

I've hardly been participating in the flickr community lately and comments have died down dramatically. It doesn't bother me though, I think I am going through some artistic changes and that sometimes makes everything feel so pointless and blah, I just can't muster up the enthusiasm to participate, right now.

Anyway, sorry to have gotten off track. Thanks for the answer!

Hi Tim -- Imagine my surpise when I stumbled upon this page and saw MY LIVING ROOM in the second photo
from the top (Kathleen and Damien).
In my hazy memory of that day, I had run into the photgrapher, Elaine Mayes, on Haight Street, and invited her and who-remembers-how-many others up to my apartment to take photos of moms and babies.
As it turns out, the photo Elaine took of me and my baby Darcy is found on several websites, such as:

What a memory rush to see myself and my daughter from back then.

Thanks so much for posting these pix!

Linda, Thanks so much for writing! It's really a rush for me too to get mail back from the void. It's shocking to realize 1968 was 44 years ago. Far out, rilly (ha).

I'm glad we made it. Wish you the very best of the rest.
Tim

I am in the photo of the "Communal Group" the girl in the middle with my hair pulled back. It was 1968. I was able to locate Elaine in 2017, the Anniversary of the Summer of Love (in 1967) We e-mailed one another, and then spoke on the phone. It had never occurred to me, all those years after computers became popular,to try to find Elaine. I was shocked at how easy it was. I was excited to speak to her and learn that she had been in touch with one other of the subjects in the photo. I also know where she is: still in the SF Bay Area. Of the ones I knew well: one is living in Los Angeles and we keep in touch. The other died 13 yrs. ago. We had kept in touch and were close. Both happy and sad memories. My children are 35, 40, and 48. They think it is funny that I was a Hippie. My grandson is 20. Happy Trails to all of you out there,
Eileen

My name is not Mary; i do not know why the computer put that.
Best Wishes, Eileen, the Hooley Queen