A photographer looks at Swoon 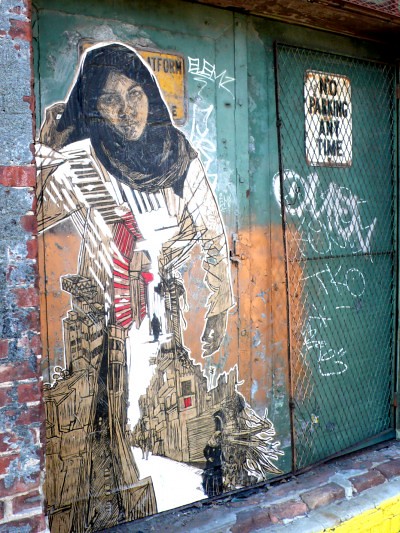 "Street art by Swoon, Brooklyn, NY," Jaime Rojo
I saw my first street installation by the New York artist, Caledonia Dance Curry, known as Swoon, years ago in the Gowanus section of Brooklyn. Gowanus was then a mix of aging and abandoned low-rise factories, warehouses, loading docks and junk-filled lots. It was a favorite destination for taggers and graffiti artists, who took advantage of its off-hours’ emptiness to paint their rowdy bright-colored works on its many blank walls. For me Gowanus was a quiet place to walk on weekends and take pictures.

Swoon’s street art in Gowanus and, later, in other parts of the city, always stopped me and made me look. Despite its obvious sophistication, the work has the intensity of a child. Her prints, made from drawings on paper, cut out and carefully wheat-pasted at selected locations, are stylized portraits that often morph from (or into) other creatures and places. They’re over-sized, but not too big — the figures a little larger than human. Sometimes, Swoon cuts out lines and wedges from the portraits or creates lace-like additions and lets the walls shine through the openings. Color is also used on the prints – but sparingly. 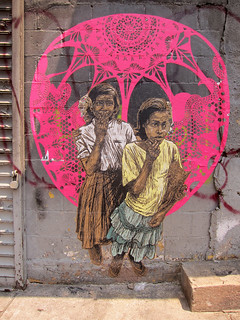 "Two girls, street art by Swoon"
One of the things I always liked about these outdoor installations was that they are suddenly there; they are not signaled or heralded in any way. After mounting, they are left to the elements and the unpredictable mercies of passersby. Swoon makes sure to locate her prints where ordinary people will see them – and maybe not see them as art. Naturally, they are much photographed and subsequently circulated through photo-sharing sites to a potentially unlimited audience online.

Dramatic and of-the-moment, the best of these repeatedly shared photographs – along with the offhand brilliance of the her art-name, Swoon – have no doubt done a great deal to spread Curry’s reputation and differentiate her from the other talented artists who use similar methods (I’ll mention, for example, Brian Adam Douglas — moniker Elbow Toe – whose work I also saw on Gowanus walls).

I know Swoon’s placement of her work is an expression of her conviction that art needs to move out of the studio and take back public visual space from advertisers and brand masters. It’s a conviction shared by Swoon’s British counterpart, Banksy, and thousands of other less-well-known artists worldwide. But, unlike Banksy, with his stenciled, laugh-out-loud provocations, Swoon’s approach is essentially romantic.

This renders her outdoor prints especially vulnerable. Made of paper, they’re organic and destined to fade, fray and fall away under the constant onslaughts of wind and weather. This is exactly the opposite of the results the art world strives for and, arguably, the most radical aspect of Swoon’s work. It’s also the aspect, I’d argue, that excites street photographers, who approach these prints, not as precious art to be recorded, but as elements of a particular moment’s concatenation of light, shape, color and meaning. 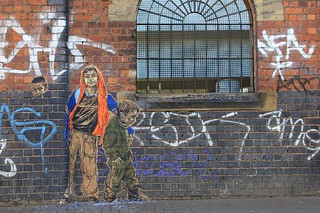 "Street art by Swoon, London"
I was thinking about these ideas as I entered Swoon’s monumental installation, “Submerged Motherlands,” last weekend at the Brooklyn Museum. “Motherlands” fills a large high-ceilinged room, centered on a wonderful 60-foot-high fabricated tree covered with thousands of long strands of dyed fabric. The tree is flanked by a small charmingly decorated structure, called a “nest” or “hive,” where visitors can rest. “The Miss Rockaway Armada” and “The Swimming Cities of Switchback Sea,” two large ramshackle wooden rafts full of junk and tools turn out to be what’s left of Swoon-and-company’s amazing art-flotation adventures, on the Mississippi and the Hudson respectively, in the summers from 2006 to 2008. Swoon’s portraits in different sizes are spread throughout the space.

I didn’t get much from the exhibit notes, which adopt a sort of fantasy tone to suggest the show is about climate change and refer vaguely to Doggerland, a once-populated area between England and the Continent that went under as sea levels rose about 6,000 years ago. But it occurred to me that, even if the waters were rising outside the Museum, we would all feel cozy and well cared for in this exhibit. And, in fact, at that moment a museum guard politely warned me to not get too close to the art.

This show seemed to me a very long way from Swoon’s audacious collective raft projects of a few years ago – she has referred to the raft armadas as enactments of her childhood dreams. Perhaps the show is even farther from another kind of dream – say, a solitary print on a Gowanus wall as the February light is slipping away fast.

To confirm this, I looked more closely at the portraits that populate the show. Crisply reprinted in different sizes, many of them standing on their own, all are recycled. Perhaps this isn’t so strange. I’m aware that Swoon likes to repeat images and spread the notion of a kind of family around the city, but here, in a major museum show, in her hometown I thought she might show something new.

But there they are – Swoon’s mother and friends, portraits from Haiti and Mexico, a beautiful woman breastfeeding her baby, two grizzled toothless men with casts on their arms, laughing. Why do they feel so empty? 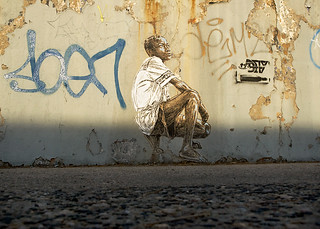 I think the answer is context. Here at the museum I’m part of a swirling, cheerful crowd in a magnificent high-ceilinged, sky-lit room. Everyone is talking. Everyone is taking pictures with tiny point-and-shoots and camera phones. It seems almost like an alternate to looking. As soon as shooters have their picture, they turn away and move on. A new normal?

I recognize a print of a black boy in a decorated tunic and shorts squatting on the ground, glaring upward. It’s an image I photographed on a heavily-tagged wall in Gowanus (on Union Street in 2011, it turns out). I remember crouching way down, almost to street level, to frame the picture. Afterwards, I looked at the boy for a long time. Alone on the street, I felt I understood his tense posture, his angry look. Not here.

Researching this article, I listened to Swoon talk on video about how her big collective projects had been exhausting experiences from which she needed time to recover. She called them “going outside” projects and said that afterwards she needed to “come inside” by accepting gallery or museum help to work on her own art.

That sounded (and sounds) reasonable to me. But, as I left this show, I really just wanted to urge Swoon to “go back outside” soon.

This article also appears in The New York Photo Review.
Posted by Tim Connor at 12:04 AM No comments:
Email ThisBlogThis!Share to TwitterShare to FacebookShare to Pinterest 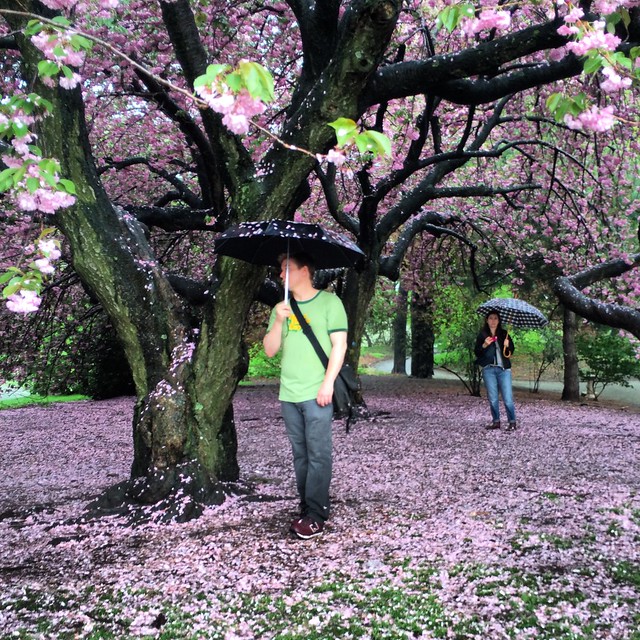 "Under cherry trees in the rain, Prospect Park," Tim Connor, All rights reserved
Posted by Tim Connor at 10:46 PM No comments:
Email ThisBlogThis!Share to TwitterShare to FacebookShare to Pinterest 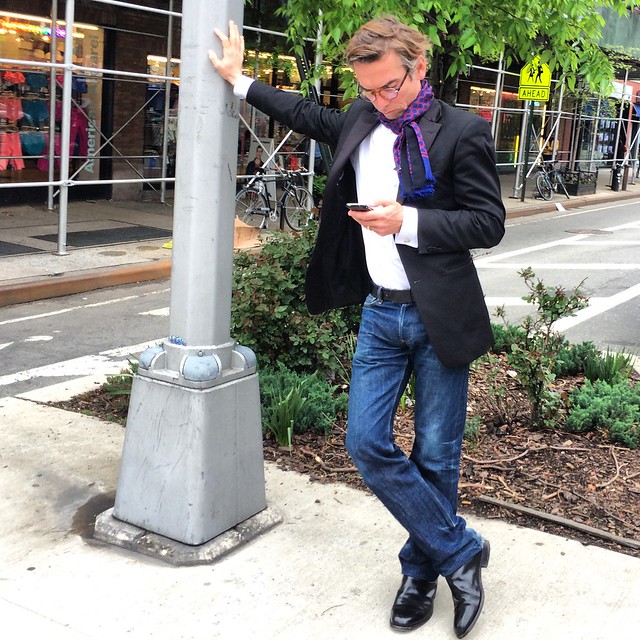 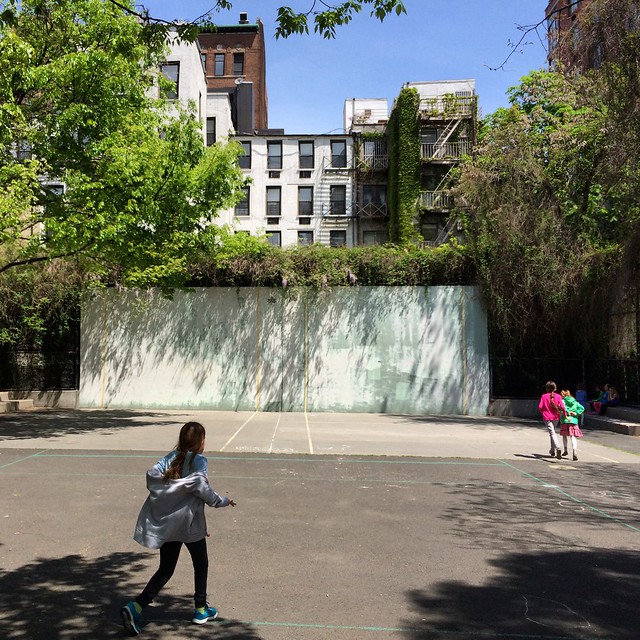 My flickr page
Posted by Tim Connor at 10:58 PM No comments:
Email ThisBlogThis!Share to TwitterShare to FacebookShare to Pinterest 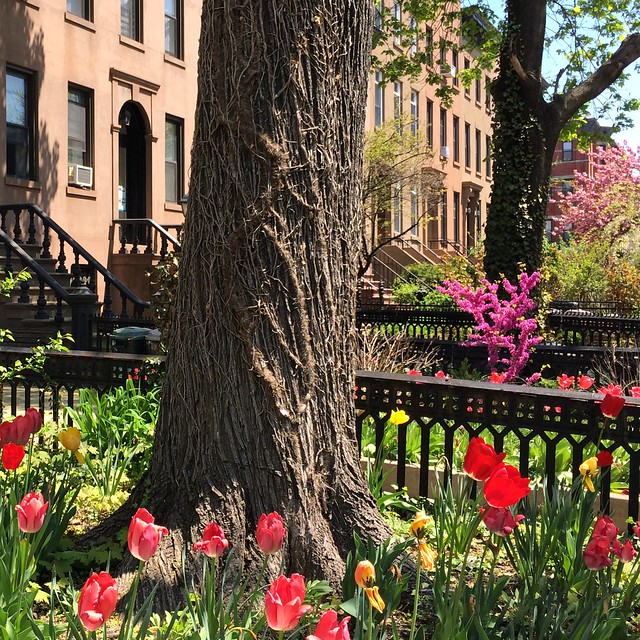 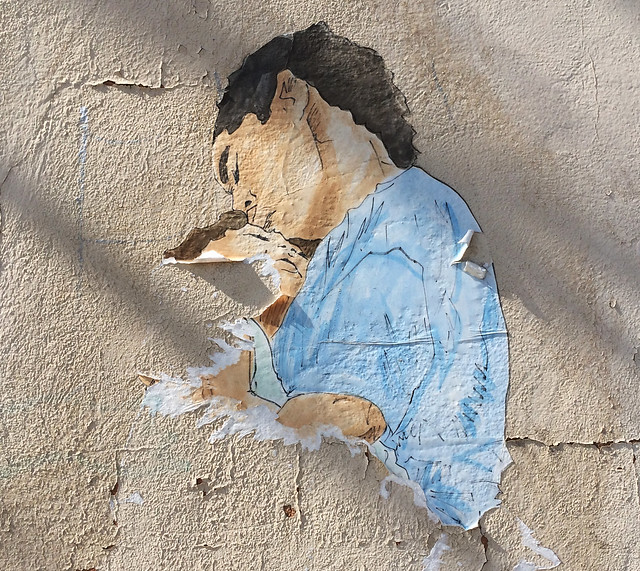 "What remains of love," Tim Connor, All rights reserved

I found this on a nondescript wall on Carroll Street in the Gowanus section of Brooklyn. Did the artist (unknown) partially rip his or her picture off the wall? Was it the heavy rain recently? Or did someone else do it?
Posted by Tim Connor at 11:52 PM No comments:
Email ThisBlogThis!Share to TwitterShare to FacebookShare to Pinterest
Newer Posts Older Posts Home
Subscribe to: Posts (Atom)