Back from Nepal: John Rae 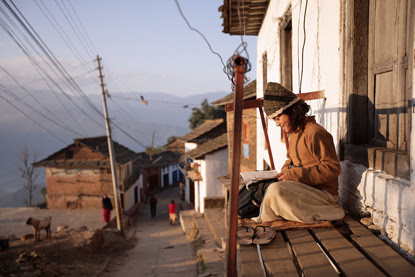 John Rae works as a commercial photographer in NYC to afford low-paid shoots in developing countries for the Global Fund to Fight AIDs, Tuberculosis and Malaria. Not long ago I reported on John's exhibit in Berlin. I asked him what countries he has traveled to for the Fund, & he made the following list: Sri Lanka, Honduras, Romania, Moldova, Kyrgyzstan, Rwanda, Zanzibar, Cambodia,Vietnam, Thailand, Nicaragua, Guatemala, Laos, India, Nepal, Jamaica.

These pictures are from Nepal. 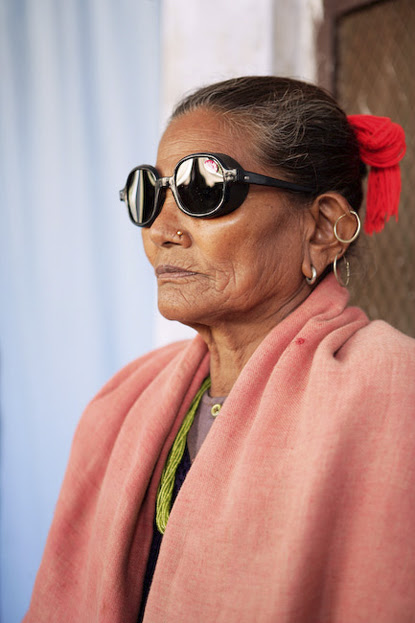 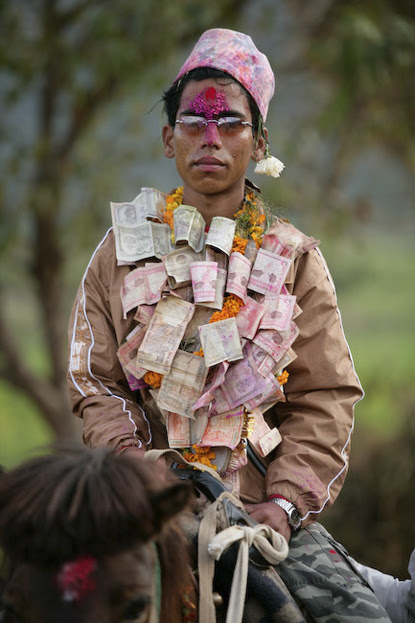 Photos by John Rae, All rights reserved.
Posted by Tim Connor at 10:35 PM No comments:
Email ThisBlogThis!Share to TwitterShare to FacebookShare to Pinterest 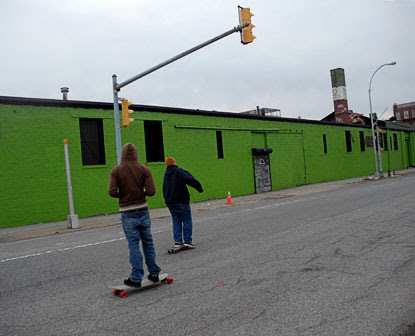 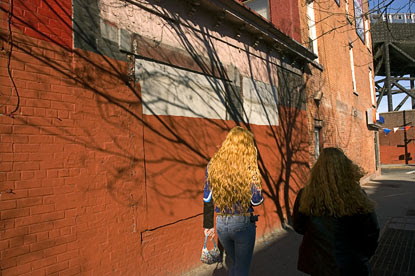 See "Rapunzel..." at 4ft. by 6ft. size in my subway show at the MTA's Atlantic Ave/Pacific St station in Brooklyn.

Here are all the images in the show.
Posted by Tim Connor at 1:41 PM 2 comments:
Email ThisBlogThis!Share to TwitterShare to FacebookShare to Pinterest

Here are some shots of people viewing the lightboxes in my new Arts for Transit show at the Atlantic Ave/Pacific St. MTA station in Brooklyn. The eight 44" X 65" lightboxes are in the tunnel between the D,M,N,R,2,3,4,5 trains & the Q & LIIR tracks (you need to go down the stairs from the D,M et. al. to the underground plaza, where you see signs for the Q & LIRR).

Thanks to Ranjit Bhatnagar, whose show mine replaces. Ranjit took these pictures during deinstallation/installation & kindly offered to let me use them. 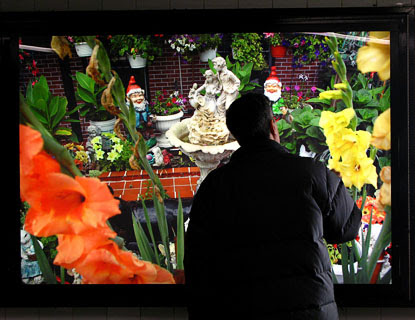 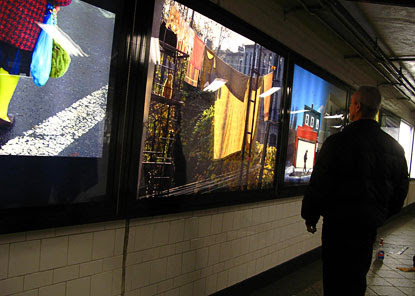 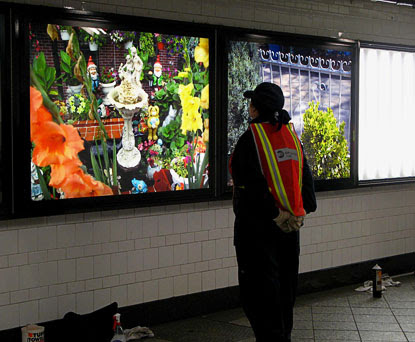 Photos by Ranjit Bhatnagar, All rights reserved
Posted by Tim Connor at 10:33 PM 5 comments:
Email ThisBlogThis!Share to TwitterShare to FacebookShare to Pinterest

I'm up down in the subway! 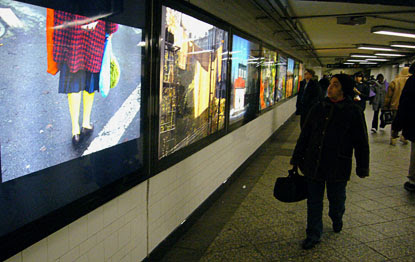 Installed today, my photographs are the new Arts for Transit show in the Atlantic Ave/Pacific St. MTA station in Brooklyn. It's in the tunnel that runs between the underground plaza where staircases/escalators ascend to the D,M,N,R,2,3,4,5 tracks & the Q & LIIR tracks (go to the lowest level & follow signs to the Q & LIRR. There are 8 lightboxes, each 44" x 65". The pictures were all shot in the neighborhoods that spread out around the station.

This photo makes no attempt to show the images accurately, just the ambience & the scale. I'll make better pictures soon. We're planning a big get-together to celebrate this show & you'll get word about that, but in the meantime it's there 24/7. For a lot of you, it could even be a fun break from your boring commute. Hope you'll check it out.
Posted by Tim Connor at 10:32 PM 1 comment:
Email ThisBlogThis!Share to TwitterShare to FacebookShare to Pinterest 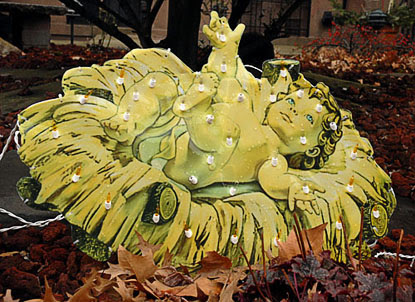 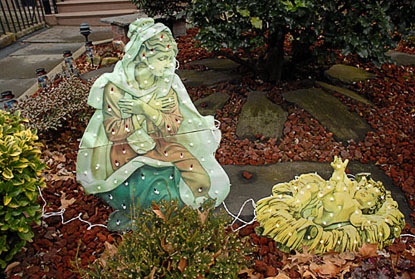 The paparazzi & the 'pop tart' 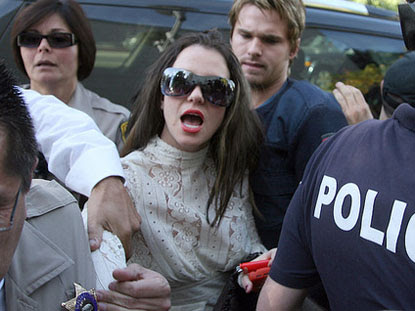 This photo ran big on the front page of today's New York Post. The headline screamed, "Brit flips, flees court on latest crazy day." The boxed teaser text read, "Burnt-out wreck Britney Spear, fresh off a meltdown that ended with her being carried off, launches into yet another wild drama-queen routine yesterday..."

Actually, I'm not here to pass judgment on this cruel & tawdry spectacle. After all, it wouldn't be a spectacle -- just a small, sad event -- if we weren't so willing to pass judgment. But I do want to share something I came across, via Conscientious, in a recent Telegraph article on photojournalist Nick Ut. 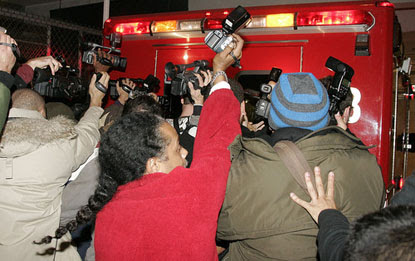 In the article John Preston writes: "...Fifteen years ago, there were only about 25 paparazzi in LA. These days, between 300 and 400 roam the streets of Beverly Hills. Together, they generate about 120,000 images a week, which are beamed straight to the computer screens of more than 20 specialist agencies

"…Why does anyone do it? That's easy enough: money. A good image, bought non-exclusively, will make between $1,500 and $2,000 for print publication. For exclusive rights of a middling celebrity doing something mildly interesting, you can get as much as $15,000.

"…As for the really big stuff, the potential rewards are almost limitless. Two years ago, US Weekly paid $500,000 for a set of photos of Brad Pitt and Angelina Jolie walking along a beach in Africa. And this was only for American rights: a worldwide sale could double or even triple that."

Astonishing. The familiar shitpit of indifference & greed makes us all stink. It's not the fault of the photographers alone. Still, for the 1st time on this blog, I'm deliberately leaving off the photo credits.
Posted by Tim Connor at 10:32 PM 1 comment:
Email ThisBlogThis!Share to TwitterShare to FacebookShare to Pinterest

I thought I was done with madonnas... 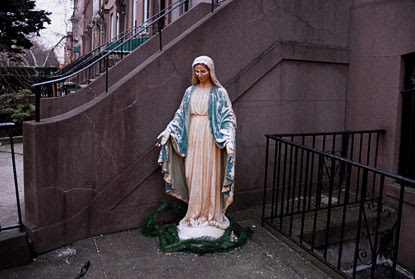 More saints & madonnas here.
Posted by Tim Connor at 12:42 AM 1 comment:
Email ThisBlogThis!Share to TwitterShare to FacebookShare to Pinterest 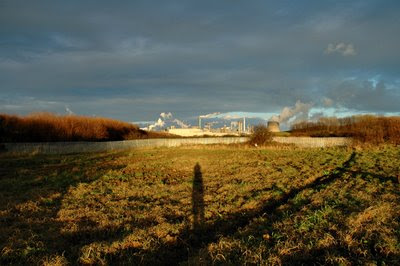 Untitled photo & poem by stringbeanjean from Haunt Me

the most memorable winter
i could still run
hard ground, no gloves
i don't know if he believed in heaven or not and i dared not ask and he could not speak
i was hungry but did not want to go home
i started to believe at some point that i was my father, not just like him
of course i imagine him under the ground, no doubt so does she but all we talk about are the hyacinths and miniature daffodils that make his bed
always coming back to this / these thoughts / this field / that day
winter sun / son in my eyes

See the original photo & poem at her blog, Haunt Me.
Posted by Tim Connor at 5:02 PM 1 comment:
Email ThisBlogThis!Share to TwitterShare to FacebookShare to Pinterest 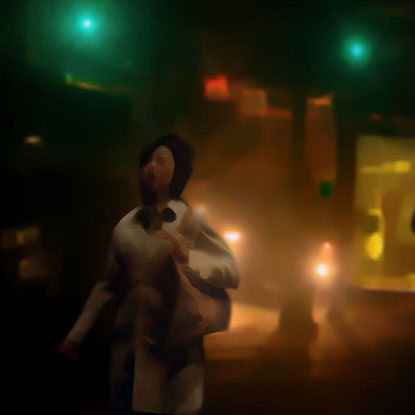 Ron Diorio resists labels. He’s a photographer -- but not exactly. He makes pictures of people, places & things in the world –- but not exactly. So what is he? Maybe he’s a painter. Perhaps he’s a translator. Or a storyteller. One thing I know -- & you should check this out yourself at Ron’s first solo New York show, opening tomorrow night (1/10) from 7-9pm at Peter Hay Halpert Fine Art –he’s an artist of uncommon originality & rich feeling.

I knew Ron first as av_producer at fotolog.com and then at flickr.com. Later we became friends when we served together on the board at Brooklyn's Positive Focus organization. It amazed me that we both expressed passionate, almost diametrically opposite political views but were able to be, not just civil, but actually gracious about it (this hasn’t happened to me very often). It may have helped that both of us -- unlike so many shooters -- love to talk & write about photography. Or, in Ron's case, about a new photographic-pixel-based art form he has invented. 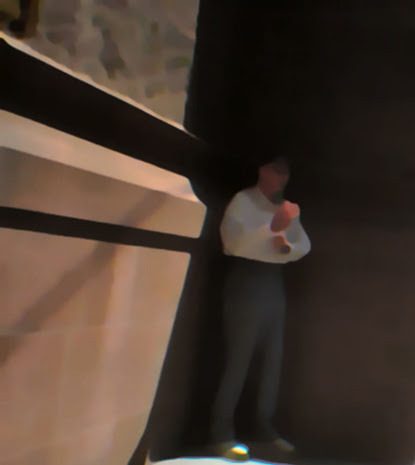 Ron writes: “Photography appropriates the world. I present an imagined context. Ambiguity and anxiety from outside the border of the image is an editing choice. Photographers want to be something else -- a witness, too often a witness that can't be cross examined. If anything I am trying to explore the lies we tell ourselves. Or at least the lies I tell myself. I will tell my own stories. I am not interested in telling the story of others.”

Here’s the little I know about Ron’s method. He uses a variety of small low-rez digital cameras to make at least 100 images every day. He calls this process “harvesting” and tends to downplay it. I’ve never gone shooting with him, but a friend who did told me that, when they were finished, Ron had shot dozens of pictures my friend hadn’t even known about. In any case, however he records them, these catches or “captures” are rich with gesture, brimming with story.

Ron writes that what he’s doing is “…generating photo references. It is not about mega-pixels although it very much about the pixel. It has to do with how the images come out and the way I interact or more correctly don't interact with the people in the pictures.” 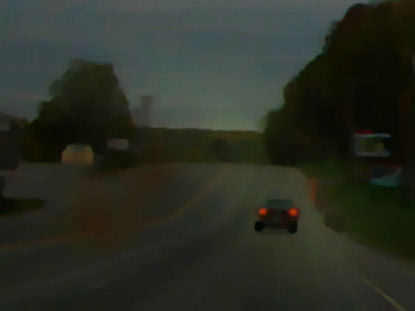 He may not look at the images for weeks or months. When he first sees them on the computer screen, he writes, “I am in a different place literally and figuratively. It allows my imagination to work more freely on the reality of what was captured.” This is when he creates the art work from the raw materials of what he has brought in from the streets. “So the use of photography is different,” he writes. “It is not the decisive moment frozen. It is a more measured purposeful encounter -- the creation of the physical object. This is what I consider to be the ‘art.’ The screen image or the photographic print is the object, the document of my process where the image becomes an image of itself. An event takes place but the viewer doesn't experience that. They experience the idea of that.”

Here's more info on the gallery: 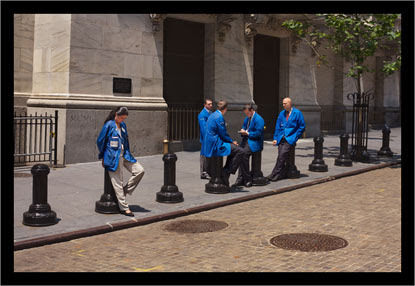 Matthew Baum likes "...the idea of meandering around, allowing the camera to lead the way." He says, "Much of my enjoyment ... comes from wandering around and taking pictures of what I see." (all quotes from Humble Arts Foundation's current show of Baum's "Limelight" series). Sunday shooters all over the world would no doubt agree. So what makes Baum's pictures different?

For one thing they succeed in the opportunistic, deadpan "you-can't-make-this-stuff-up" style of 1970s artist-documentarians like Stephen Shore & William Eggleston. But in today's market that's arguably not enough . Baum attempts to expand the genre.

A former architecture student & graduate of SVA, he has taken a conceptual step beyond shoot-it-as-you-find-it work, attempting to graft ideas of set-up theatricality, a la Jeff Wall (see my review) & Philip-Lorca diCorcia, onto his unplanned moments . At SVA they teach the importance of artist statements, & Baum's has written a good one (it actually applies to his work). To "...merge the emotional immediacy of pictures made by observational photographers..." with the "...formal aesthetic and metaphorical content of theater and, consequentially, constructed photographs...", he says, he has developed a post-processing technique that "...distills basic information such as color and surface texture to the essential. They become sculptural..." As a photographer who often tries for the same kind of revelatory formal-informal, incubational stories as Baum, I'm impressed & intrigued. Look at a few in larger size -- e.g. here & here -- to get a better sense of how this subtractive technique focuses the imagination. To give a clearer sense of what's going on, here's a direct comparison of one of my own shots with a similarly-themed one by Baum (p.s. this is not a contest). 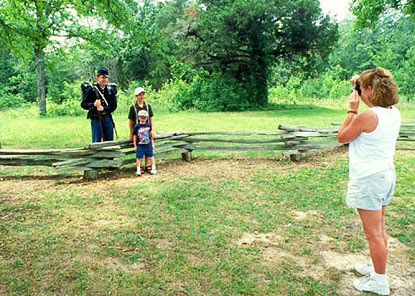 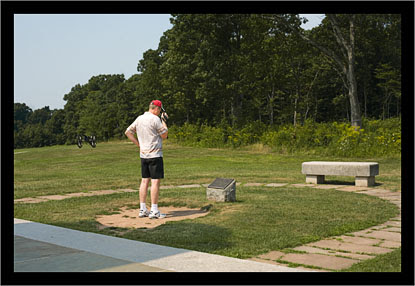 The difference doesn't knock you over, but it's there (obviously we're dealing with tiny web JPGs here). My only question is how much retouching is necessary for this subtle simplification? My own experience with post-production of grabbed shots is that backgrounds -- the necessary context -- are almost always frustratingly messy. I've been actively working to change my thinking ("Leave it" is my new motto) &, in any case, my retouching skills are only fit for removing the occasional tree branch or distracting reflection. But I keep coming back to a basic fact: photography is not reality. If I'm not doing photojournalism, why am I worried about anything except making the picture work on its own terms?
Posted by Tim Connor at 4:20 PM 7 comments:
Email ThisBlogThis!Share to TwitterShare to FacebookShare to Pinterest

The holidays are over... 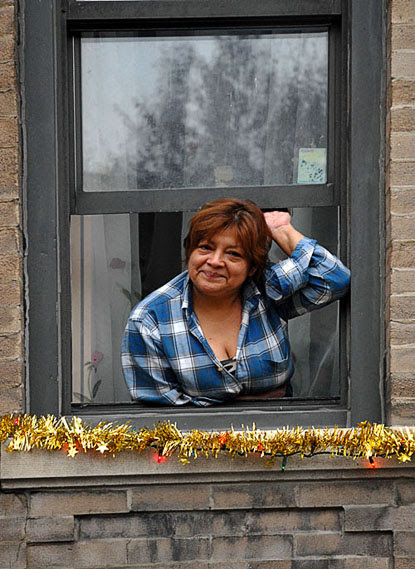 "Christmas in the neighborhood," Tim Connor, All rights reserved

Every year I'm more grateful for the human rituals -- the lights & music, the warm rooms, the gifts & the feasting & laughter. I play my part -- do my share to help push back the cold & darkness, which I know are metaphors for despair & for death.

But, as I struggle through shopping & put up the tree, as I gamely ask the near-stranger at the party how he's been, I also accept that I'm in some way separate, outside, one step removed from the festivities. It has always been this way & I'm certainly not complaining. I participate. I do my best to connect & sometimes I succeed.

Yet I'm relieved when the holidays are over.

"If life is a living room
then I'm in the hall
and I'm glad..."
Posted by Tim Connor at 11:40 PM 4 comments:
Email ThisBlogThis!Share to TwitterShare to FacebookShare to Pinterest
Newer Posts Older Posts Home
Subscribe to: Posts (Atom)