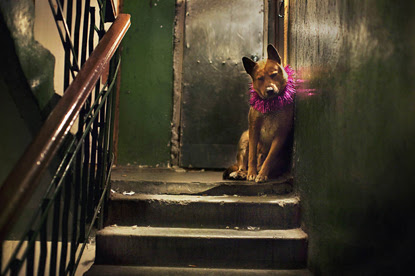 By Evgenia Arbuaeva, All rights reserved

"Tiksi is a small village located on a shore of Arctic ocean in Russia. It was built in USSR by people who believed in the future of the Arctic and were coming here from all over the country: scientists, explorers, the military. I was born in here and after fall of Soviet Union my family, as most of the population left Tiksi. But I could never forget this place with it's vast tundra blown off with winds so strong that if you are a little girl it can easily pick you up and bring to places. My playground with stars during Polar night, lighthouse in a blizzard... This year I came back to my home village for the first time in twenty years. It was a journey to surreal childhood memories. Some people say that Tiksi will be closed in near future because it doesn't serve a purpose anymore. Before that happened I wanted to capture this special place 'in the middle of nowhere'."
Posted by Tim Connor at 10:37 PM
Email ThisBlogThis!Share to TwitterShare to FacebookShare to Pinterest