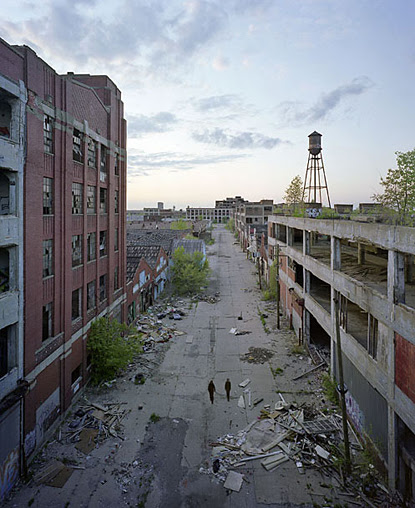 Ah dystopia! As a culture, we seem to be wild right now for wrecked grandeur, for dramatic ruins (with or without zombies). Personally, I've always been thrilled with the notion (remember what Neil Young sang, "Don't let it get you down/It's only castles burning."). In fact, to this day I get a schoolboy jolt of pleasure from the grim ironies of Shelley's imaginary "...look upon my works, ye mighty, & despair" poem.

Unfortunately, the initial evidence suggests that our own real-life declineas a nation -- & as a world -- won't be nearly as much fun.

Here's part of what Marchand and Meffre say about the city:

"Nowadays, unlike anywhere else, the city’s ruins are not isolated details in the urban environment. They have become a natural component of the landscape. Detroit presents all archetypal buildings of an American city in a state of mummification. Its splendid decaying monuments are, no less than the Pyramids of Egypt, the Coliseum of Rome, or the Acropolis in Athens, remnants of the passing of a great Empire."

Thanks to Jessie Allen, author of The Blackstone Weekly, for the tip.
Posted by Tim Connor at 11:26 PM
Email ThisBlogThis!Share to TwitterShare to FacebookShare to Pinterest