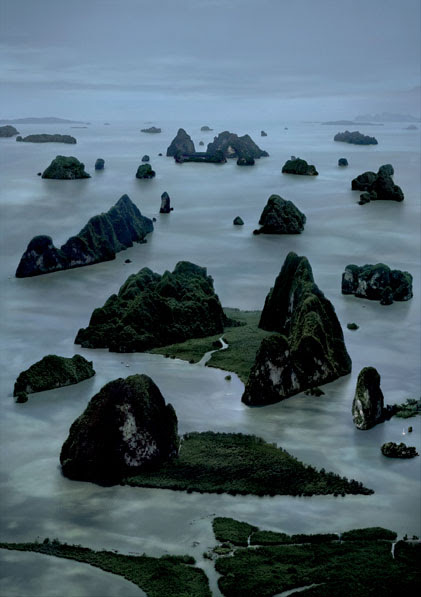 I wrote 2 weeks ago here that Andreas Gursky's new work , seen on the web, seems “chilly.” Well, I saw his pictures in person today at Matthew Mark, and they struck me as almost robotic in their perfect lack of emotion. I imagined a spaceship, a kind of bristling techno-bubble, beaming further & further from earth, programmed to detect pattern but oblivious to human concerns. Not that this is without its fascination. Computer-assisted cameras don’t see like humans. They see better – at least in technical terms. They also see without bias.

It may be that Gursky is presaging a world of all-powerful networked satellite & surveillance cameras. This doesn’t seem far-fetched. But it’s not clear from his work what he thinks about the idea. Several images in the show want to have it both ways – awe-inspiring macro-patterned spectacle & identifiable human stories. 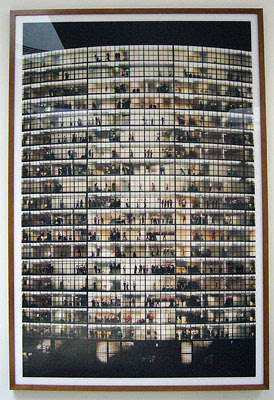 From a distance his picture of the glass-windowed wall of a high-rise hotel, for example, depicts hundreds of human beings engaged like colorful insects in incomprehensible activities. 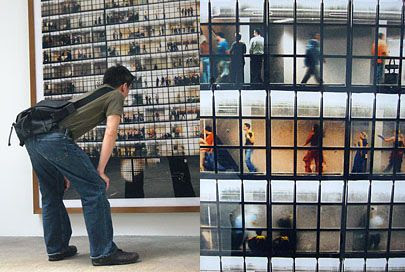 "At the gallery," Tim Connor, All rights reserved

But move closer. At 10 feet tall the picture has more than enough detail for the viewer to zero in on individuals & groups of individuals. Where is this crowd rushing? What is that sexy woman doing? Look, that man seems to be gesturing at the camera! What’s going on here?

I think it’s interesting that Gursky & others are pushing the technology to include both context & stories in the same image. But the stories need to be involving in some other way than as technical achievements. Once a certain scale is passed, this is harder & harder to accomplish. Too often in this show Gursky seems to depict spectacle for its own sake. The images feel empty.

I came upon a very strong related critique of this aspect of Gursky’s new work in a blog piece by pathetica. He says in part:

“…there is nothing in Gursky’s work itself to suggest any kind of critique of these massive projects he photographs so grandly. Rather everything looks to me like the Grand Glorification of Money and Industry. Look how much of the earth we can take over for our racetrack. Look at how our structures dwarf the tiny humans. Even his natural subjects start to look like Land to be Colonized. It’s the Capitalist Sublime. Of course it helps to remember just how much these pictures cost, and who’s buying them. Do the bank-owners believe they’re spending six figures on a critique of their wealth?”

At the end of his piece (scroll down to see it) pathetica juxtaposes two images: Gursky’s depiction of an elaborate homage to the current Dear Leader in Pyongyang, North Korea & a historical homage by another world-famous German photographer to a "leader" a generation ago. Pathetica says he just "couldn't get it out of my mind." Whether it's fair to Gursky or not, I couldn't get it out of my mind either.

Posted by Tim Connor at 5:35 PM
Email ThisBlogThis!Share to TwitterShare to FacebookShare to Pinterest