Almost got it...at the Mermaid Parade 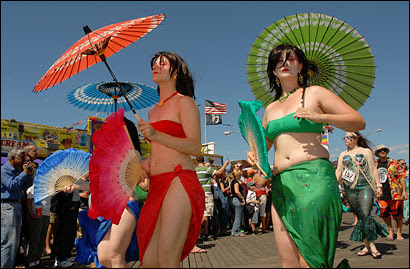 Along with about 10,000 other photographers, I was at Coney Island on Saturday blazing away at the willing exhibitionists in this year's Mermaid Parade. For those of you who don't know, the parade is a Brooklyn seaside event, created in 1983 by local artists as a jokey carnival of sun, sea & summer. This year I heard a lot of complaints about how big & commercial the parade has gotten, but the separation between participants & spectators is still pretty porous & -- it seemed to me -- wacky (& raunchy) amateurism remains the rule.

I got a lot of good shots (above is an almost random example) but no winners. I'm not too disappointed. I think you just don't get many with this kind of on-the-move, small camera street shooting. With big restless crowds, multiple scenes & stories happening all at once it's like shooting inside a kaleidoscope -- instinctive, unplanned, gestural, reactive. You need some luck. If you're technically competent, open to possibilities & you work hard, you definitely raise the chances of getting lucky. But, like any gambler, sometimes you have to wait.

On his 2point8 blog Michael David Murphy recently did a great interview with veteran street shooter Richard Kalvar that touches on this point. Here's an excerpt:

2point8: When you’re out shooting, you know when you’ve got a particular shot.

Kalvar: What counts is the result. It works or it doesn’t work. You may think after you’ve taken a picture that you may have something. And then you find out that you don’t have anything, that you almost had something – but that in fact, you pressed the button at the wrong time. That you took a lot of pictures, but you were on auto-pilot - that instead of waiting, you shot buckshot at it, so you missed the one that might really work.
But every once in a while, I look at my contact sheets and I discover something I hadn’t even seen. That’s possible, too.

Kalvar: Yeah, I take a lot of lousy pictures, and sometimes it turns out that one of the ones that I didn’t even think about was in fact pretty good.

A couple of years ago I got what I think are a couple of keepers at the Mermaid Parade. Here's one. I'm still fascinated by this kind of shooting. I'm going to keep doing it.
Posted by Tim Connor at 12:25 PM
Email ThisBlogThis!Share to TwitterShare to FacebookShare to Pinterest

Well, sometimes I get that wonderful feeling that I did get the shot! And I find out later, I really did get the shot...but most of the time-I hate all my images the first time I look at them. That seems to change when I go back and look at them at a later date.

Well, with that many people (all possible subject matter) running around it's crazy. With the bright sun straight overhead, it's maximum high contrast light... difficult to get a "correct" exposure...With off-camera flash (which I like to do) it's still hit and miss, but when you hit, it's wonderful. Moral of the story, swing a lot and you'll get more hits. haha
Still waiting for my film to be developed...maybe that will be different?

I shoot a lot of photos of fiestas here in Mexico and it's the same problem. Things are moving and fluid and it's easy to be at the wrong place at the wrong time. I just finished a shoot of the Corpus Cristi fiesta in Suchiapa, Chiapas awhich I've done now 8 years. I got good results this time; I think knowing the fiesta and how it moves and stops through the town helps. Or maybe I just got lucky.

I've always envied those who can previsualize their shots and set them up to be perfect, straight from the camera. My mind doesn't work that way, and I think I am starting to accept that it is ok to be a point and shooter. I keep a folder of possibilities filled with images that I have shot, and then when I am feeling creative, I open up Photoshop and look through my shots or begin to experiment with them until an idea develops and I go from there.

Terri, I envy you your post-production imagination & skill, which are extraordinary.

With this kind of shooting I pre-visualize like 1 second before I shoot. The pre-visualization is mainly a general concept -- wide angle plunge into the scrum, move in on the main fascination, try to click when the whole composition radiates out from there. I almost never do it just like that of course. And of course I do plan a little, move around according to angles & light & the ongoing nature of the event.

Tim, I like your analogy of "shooting inside a kaleidoscope." I find I can easily shut down and become discouraged from doing anything in such settings. But sometimes you do get into a zone where you're clicking almost instinctively and you know you're getting something interesting just because you're close or because you've adopted an interesting angle, or whatever. Add some vivid colors and you're sure to be on to something interesting.