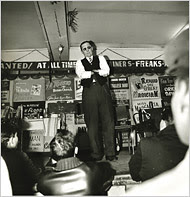 "DeWise Purdon, 'the man with no hands,' at Hubert’s," Diane Arbus

The NY Times reports that 21 early photographs by Diane Arbus have turned up in "a pile of papers" originally auctioned off as unclaimed possessions by a storage warehouse in the Bronx (see the story here). Bob Langmuir, the man who discovered the prints, is described as a "... rare-books and memorabilia dealer with a deep knowledge of old blues and folk recordings" who "...spent his youth rambling through Europe and Russia, serving as a merchant mariner and working briefly as a roadie for Muddy Waters. "

Sounds like he deserved a break. It probably helped that he at least knew something about the collecting business, as I imagine when word got out, he felt like Josh Brolin being hunted by Javier Bardem in No Country for Old Men.

The newly discovered Arbus's were shot at Hubert's Dime Museum & Flea Circus, a Times Square emporium of the bizarre, in the late 50s, right after Arbus split from her husband & their shared fashion photography business. According to the story, they depict "...giant cowboys, tattooed men, snake dancers and...'the man from World War Zero.' ”

Arbus's fascination with the outlandishly different became one of the great themes of her work, of course, so these are important pictures for the light they shed on her evolving methods & style. But I wonder if they're anything special as photographs. And, if they're not, I wonder how Arbus would react to the news that they're now worth a fortune.
Posted by Tim Connor at 11:49 PM
Email ThisBlogThis!Share to TwitterShare to FacebookShare to Pinterest