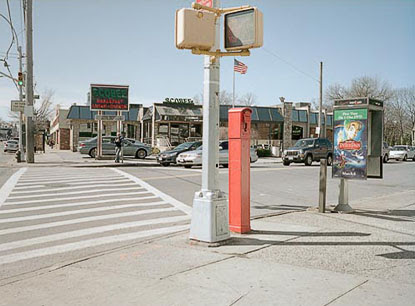 I've been following the work of Zheng Yaohua, one of the nine, -- known as zeyez on Flickr -- for a while. He makes deadpan, deceptively bland snapshots of streets & intersections, buildings, restaurants, houses, small parks -- all the ordinary places -- in areas like Queens. At first glance these pictures seem so undramatic as to be almost random. But, if you continue looking, you see they are subtly composed, carefully patterned. Although the pictures claim only to represent themselves, their wan light & exaggerated lack of incident seem to brim with not-quite-decipherable meaning. What are they trying to say?

Zheng's pictures in the show, selected from his series "On Their Sites", give us a hint. He writes that the series is inspired by Joel Sternberg's smililarly-named On This Site, a photo book that revisits the locations of horrible crimes (e.g. see here the crab apple tree under which Jennifer Levin's body was found). Sternfeld's book questions the problematic nature of photographic representation & the slippery meaning of collective memory. But Zheng's homage goes beyond that. Listen to what he writes to accompany the picture reproduced above.

"Tony Brandon scraped his left knee on July 7, 1967, in a semi-serious fight with his classmate George Tenet, a CIA director later, on the sidewalk near the eatery that the Tenets used to own ('Scobee' or the former '20th Century'). He remembers how badly it hurt and how George worried about his new shorts being torn, which were a birthday gift. It was his [Tenet's] birthday that day."

In an addendum Zheng adds: "George Tenet served as the Deputy Director and the Director of the CIA from June 1995 to July 2004. He was born on January 5, 1953. It is likely that Brandon's memory of the date that had three 7s was related to another event."

This is a strange, obscure, oddly fascinating story. Unlike Sternberg, Zheng is initially concerned with private, not public memory. Who is Tony Brandon? How did he & his story come to Zheng's attention? Is the story, despite its meticulous fact-checking addendum, after all, real? The details feel too weird to be invented. The inclusion of young Tenet, the pugnacious lickspittle who as a grown man would in 2003 reassure George Bush that the Iraq War was "a slam dunk," pushes the story into the public realm. It also knocks the general interest level up a notch. We watch Tenet scuffle, hear him whine about his mussed-up new clothes. It feels like a unique insight. It sounds like a real memory.

But what if it's fiction? Personally, I don't care if it is or isn't. Is the past real or fiction? Is there somewhere it can be accessed with any kind of accuracy? "Little Neck Parkway at Northern Boulevard" is here in the photograph & there in the past. Real or not, Tony Brandon & George Tenet are grown up in a new story. Everything is changing every second. It really is that complicated.

Maybe -- with his 'ordinary' photographs -- that's what Zheng means to say.
Posted by Tim Connor at 5:07 PM
Email ThisBlogThis!Share to TwitterShare to FacebookShare to Pinterest

Tim, I've read it for two days with my dictionary, am sure your words torn the surface and reached deeply where I was. (Hope I write more than I could.)

It is the first critique on my photograph. Thank you, Mr. Connor.

May I post it on my site, beside the my work?

(Sorry I'm not able to appear on the opening because of work.)

Yes, go ahead & post it on your site. I'm honored that you like it. I was worried that perhaps I speculated too much.

I hope your opening is a big success. Good luck in the future.

The opening was a big success and fortunately,
Mr. Zheng made it. :)