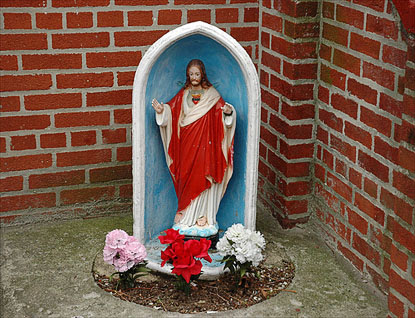 This weekend is your last chance to see my pictures at Topos: Brooklyn in the Nelson Hancock Gallery. I have 20 pictures in the show, which also includes work by 7 other artists. My pictures document an ongoing obsession with the small, usually plaster, religious statues one can see in gardens,yards & alleyways all over the borough. Here's my artist's statement about why I'm doing it.

I was drawn to the statues of madonnas and saints in the yards and alleyways of Brooklyn because they seemed to gather light. This was during the dark winter months of 2006. I was attracted to the statues for other reasons too. Raised a devout Catholic, I had turned violently against the church as a teenager and could still fly into a rage when the subject of priests or Catholic dogma came up. For me the statues represented another kind of religious impulse, outside the official church – outside any church -- more ancient. They gave a form to the universal human yearning to be magically protected, to be comforted in a hard and pitiless world. It was easy to make fun of the statues. They were in fact spiritual action figures for grown ups with their bright colors and iconic symbols, and many homeowners had combined them in dizzyingly kitschy displays with everything from garden frogs to Disney cartoon characters. I photographed them on the weekends all winter and through the spring and summer -- statues that were fussed-over and revered as well as those that were being allowed to disintegrate, a vague superstition away from being discarded. Eventually I realized that – weird as they could sometimes be -- I was photographing the saints without irony. In the end, like their owners, I found them comforting. 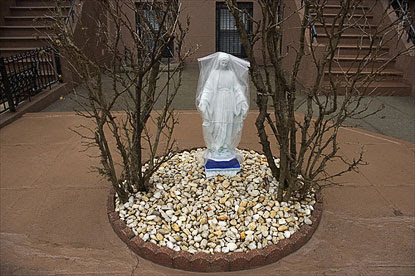 The gallery's open today (Friday) & tomorrow, 11-6. It's located at 111 Front Street in the fashionable downtown DUMBO section. First subway stop in Brooklyn. Catch it if you can. Here's how:

DIRECTIONS: Take the F-train to York Street stop or the A/C-train to High Street/Brooklyn Bridge. Walk down toward the bridges and East River until you encounter Front Street. Turn left, if you are coming down from Jay Street (F-train); make a right, if you are approaching from Washington Street (A/C-train).
Posted by Tim Connor at 2:51 PM
Email ThisBlogThis!Share to TwitterShare to FacebookShare to Pinterest