Here's looking at you 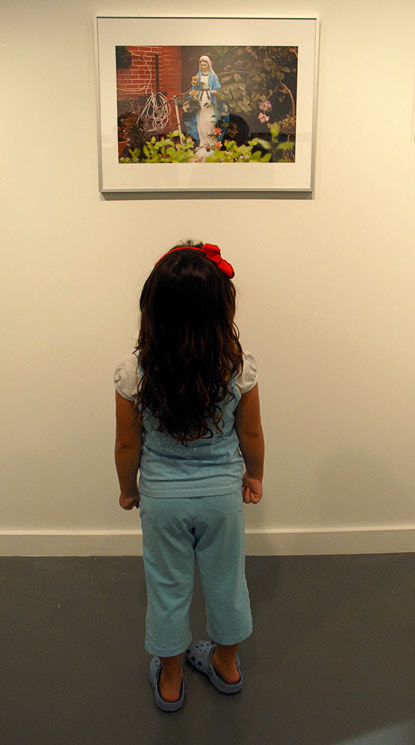 "Here's looking at you, kid," Tim Connor, All rights reserved

I wanted to watch people look at my photographs so I went to the Nelson Hancock Gallery, where five of my prints are in a show called Topos:Brooklyn . I sat in the center of the gallery’s main room facing the wall that displays my pictures. DUMBO was in the midst of its annual Under the Bridge Festival so a continuous stream of browsers came through the gallery. I sat there for about 45 humbling (but illuminating) minutes.

Most people seemed to fall into 2 categories. The first type -- I'll call them "scanners" -- drift into galleries & take in the ambience but don't look directly at the art work. Trust me, I verified this by repeated observation of their eyes. Typically, they raise their faces slightly & scan continuously through a visual hemisphere, then back, as they move through the space. It reminded me of my dog Charley's habit of elevating his nose & slowly swiveling his head, reading the canine scentosphere as he bobs along on his leash. It may be that the scanners, who usually stayed only a couple of minutes, were just being efficient. Some may lock onto pieces of art that meet their criteria, just as Charley freezes & zeros in, sniffing frantically, toward the aroma of other dogs. But I did not see this happen.

Those from the 2nd category had a related method. Typically, they stalk along the gallery walls at a steady pace, pausing their gaze no more than a second on each art work, until they have dutifully completed the task. Because they never give any work more than a single glance, I began to think of these people as "verifiers." "Hmm, a photograph, yes, another photograph, yes, yes, yes, photographs. " What surprised me was how relieved they seemed when they had finished looking.

I don't even need to state, do I, that the above are caricatures? Some browsers were enjoying themselves, taking their time on pictures that interested them, talking to their friends about what they were seeing & so on. Nevertheless I'd have to say the vast majority of those I watched fell roughly into one of those two categories.

Thus, toward the end of my experiment, I was particularly gratified to notice that a girl, about 7, who had come in with her father, continued to stand in front of my pictures after the father had moved to another part of the show. Looking up, the girl was completely absorbed. Her small hands were oddly clenched as she moved from picture to picture, studying them intently. I was fascinated to hear her say, "Oh, I get it!" but knew better than to approach her, a strange, gray-haired man asking strange questions. Meanwhile, her father was busy having a long conversation with friends. The girl stared at my photographs for over 15 solid minutes till her father came looking for her. I told him what she'd been doing & volunteered that I was very pleased she was taking such an interest. He called her over & tried to get her to talk about the pictures. She ducked her head against him in embarrassment. Poor baby.

Enough that she was really looking. Thanks, kid.
Posted by Tim Connor at 10:59 PM
Email ThisBlogThis!Share to TwitterShare to FacebookShare to Pinterest

A wonderful bit of observation, and well told. You forgot the "speed viewers." Five or six years ago we went to New York for a weekend with another couple. The girls went shopping. The other husband and I opted for a day of museums. Little did I know that I was traveling with a "speed viewer." My museum pace is decidedly casual, even contemplative. I figured Steve would adopt a similar pace, especially since he's a surgeon known for his patience amd attention to detail, and because he paints grand landscapes in his spare time.

But Steve would have put one of your "scanners" to shame. We covered the Museum of Natural History, the Dahesh, the Guggenheim and the Whitney all in the space of no more than three hours, including lunch and walking up and down Fifth Avenue and across the park. Steve would take one look in a gallery, spend no more than a second scanning to see if it interested him, and then move on. It was all I could to just to hang on for the race. I don't remember a damn thing I saw. I wrote the experience off as a day of exercise.

"The canine scentosphere"! Hah!! I love this story. It reminds me of a story The Washington Post ran a few months ago about a world class young violinist who, as an experiment, played in a metro stop during the morning rush hour. A few people stopped to listen, and one actually was dumbstruck because she recognized him. Most adults, however, just rushed by, barely registering the incredible music. But without fail, every single child was captivated, pulling back on adult hands to listen.

Excellent! You know this was real and you may have opened her eyes in an entirely new way. Nothing could be finer.