When I first started this blog, Alec Soth had a blog too. I fact, it was the go-to photography blog on the net, the one everybody said you had to read. So I read it -- somewhat sporadically but always with pleasure. It was well-informed, open-minded, generous, often funny -- & every Thursday, or maybe it was Friday, the blog abandoned photography & published a poem.

On his blog Soth himself had plenty to say, most of it very smart, but what impressed me most was his ability to pose questions & guide discussions in useful directions. There is some MC in Soth for sure -- enough ego to lead & even show off a little, but also enough modesty to let others shine. There's probably a lot of teacher in there too. Doing the blog, he was aware of his drawing power as a rising young shooter, recently elected to Magnum, & seemed to enjoy the expansive new possibilities of the internet. He & others would write about Martin Parr or Stephen Shore or the critic Peter Schjeldahl, & hours or days later, lo & behold, responses would appear from the men themselves. Some of these exchanges led to fruitful, long-term discussions. Soth never seemed the least bit stressed by all this maestro-to-maestro dialog.

Then one day he suddenly abandoned his successful, influential blog. I didn't catch the last few posts, but I gather he was simply getting sick of it. He wanted to get back to making photographs.

I thought of all this while reading the recent NY Times profile of Soth, "Trolling for Strangers to Befriend," on the occasion of his new photo exhibit at the High Museum of Art in Atlanta. The exhibit is called "Black line of woods," from a phrase by Flannery O'Connor. O'Connor "...is talking about where culture ends. I wanted this work to be about the longing to escape,” Soth explains. His new pictures explore "the idea of retreating from the world..." by focusing on hermits, survivalists, monks & hard travelers. 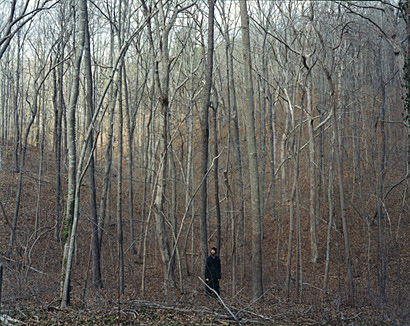 "Monk in the woods," Alec Soth, All rights reserved
In the Times article Soth talks about being terribly shy as a young art student. But he admired the work of Diane Arbus & knew he wanted to make similarly direct portraits -- so taught himself to approach strangers & start conversations. His work since has largely been about telling the stories of those who can't make the transition from shyness to speech the way he did. The awkward & the odd; the diffident & the taciturn; those who slip away. The stranger disarmed of fear. It occurs to me that making photographs of such people is the exact opposite of "retreating from the world."
Anyway, I hope Soth returns to blogging some day. His gift is for pictures yes, but also for pictures defined & informed by words. Here, according to the Times, are some words he taped to his steering wheel to remind him what to watch for as he drove. "beards, birdwatchers, mushroom hunters, men’s retreats, after the rain, figures from behind, suitcases, tall people (especially skinny), targets, tents, treehouses and tree lines."
Maybe not a poem yet, but a good start...

Posted by Tim Connor at 10:59 PM
Email ThisBlogThis!Share to TwitterShare to FacebookShare to Pinterest

I, too, enjoyed Soth's blog while he had it. I find some of his work so interesting and engaging and some just the opposite. I'm looking forward to seeing more of this Southern series. Flannery O'Conner's writing, though, like the writing and photographs of Eudora Welty and the work of Horton Foote, sets a high standard for authenticity. Against this, it's hard sometimes not to see interpretations of the South by people who didn't grow up in the South as caricatures. They see the idiosyncrasy on the surface, but not the depth of the life behind it. If you haven't seen it, I highly recommend the film "Junebug."