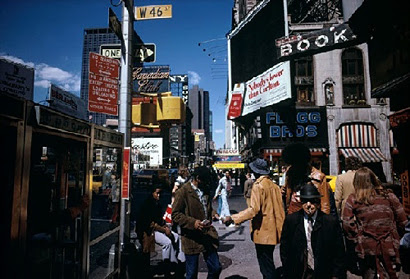 By Joel Meyerowitz, all rights reserved

"While working on the streets of New York with the Leica I began to see that the slowness of color film and therefore the depth of space it rendered, was forcing me to slow down and make photographs from further back than I had before. This slight adjustment of space and time produced a new kind of image for me, one that emptied the center of the frame of its nominal subject, 'the hook' that I had previously built my photographs on, and instead opened the frame to multiple, more fragmentary, simultaneous events. This gave me a new sense of the street as a place where everything was important; the buildings near and far; the movement of people; the basic street furnishings of light poles, phone booths, hydrants, trees, signs, store windows, all of it cohering in a way that broke open the form of my earlier work. I called these new, non-hierarchical pictures, 'field photographs,' because everything in the frame was now in play, and the more complex and open-ended I could make the image the more interesting it became to me. I felt I was testing the descriptive limits of the photograph by asking; how much dissonance can a photograph contain and still be readable? Can interesting pictures be made without depending on a central event to hold it together? What does color mean in a photograph?"
-- Joel Meyerowitz

One of the earliest & best street shooters to use color in the 60s & 70s, Meyerowitz went on to make amazing (& very different) work with an 8 x 10 view camera in the 80s & 90s (see especially Cape Light, one of my all-time favorite books). In the excerpt above he's talking about his earlier fast-moving, jazzy small camera work.

It's been my experience  the "field photograph" he describes so eloquently is nearly unattainable, a kind of holy grail for photographers. Over & over those of us who aspire to such pictures imagine them in  perfected form as we try to shoot them. I wonder:  does Meyerowitz feel he fully succeeded at this kind of picture, even once? 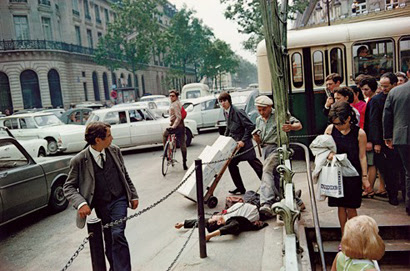 By Joel Meyerowitz, All rights reserved

Thanks to Hipshots for pointing me to the interview & to Too Much Chocolate for hosting it.
Posted by Tim Connor at 4:37 PM
Email ThisBlogThis!Share to TwitterShare to FacebookShare to Pinterest

thanks for the quote.

I've noticed that young photographers tend to get close to subjects, as if the closer they get the closer they will get to truth. Unlike the older generation, they were brought up on tv with its insistence on closeups, while I was brought up on John Ford with his sweeping panoramas. Meyerwitz's quote is one I wish I could have said to my young friends.

Thanks for this great post. I find myself guilty of extreme closeups.